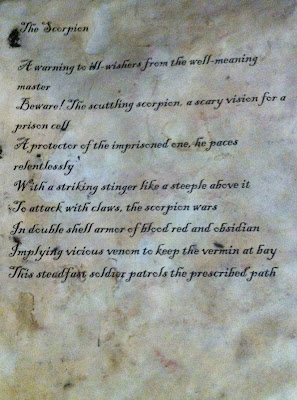 Transcription:
A warning to ill-wishers from the well-meaning master
Beware!  The scuttling scorpion, a scary vision for a prison cell
A protector of the imprisoned one, he paces relentlessly
With a striking stinger like a steeple above it
To attack with claws, the scorpion wars
In double shell armor of blood red and obsidian
Implying vicious venom to keep the vermin at bay
This steadfast soldier patrols the prescribed path

Historical Background:
Scorpius (or Scorpio), a scorpion, is probably best known as an astrological sign. According to one version of the Greek myth, Scorpius was sent by Artemis to kill the hunter Orion after he had raped a female follower of the virgin goddess of the hunt. All three were placed in the sky as constellations, with Scorpius positioned far from Orion. Scorpius rose in the Eastern hemisphere just as the constellation of Orion vanished beneath the Western horizon. Thus the myth endlessly replays in the sky: Scorpius pursues as Orion flees.

Email ThisBlogThis!Share to TwitterShare to FacebookShare to Pinterest
Labels: Scorpion, The Poem Beasts