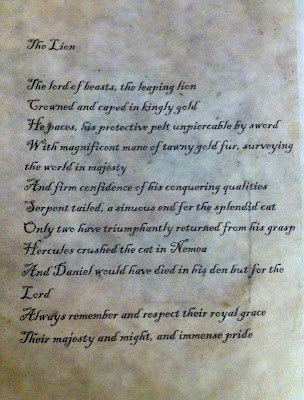 Transcription:
The lord of beasts, the leaping lion
Crowned and caped in kingly gold
He paces, his protective pelt unpierceable by sword
With magnificent mane of tawny gold fur, surveying the world in majesty
And firm confidence of his conquering qualities
Serpent tailed, a sinuous end for the splendid cat
Only two have triumphantly returned from his grasp
Hercules crushed the cat in
And Daniel would have died in his den but for the Lord
Always remember and respect their royal grace
Their majesty and might, and immense pride

Historical Background:
The slaying of the Nemean Lion was one of the Twelve Labors of Heracles.  An offspring of the monsters Typhon and Echidna, the Nemean Lion was supernaturally protected by a golden pelt that no ordinary weapon could pierce.  Heracles strangled the lion, and used its pelt to create an armor usually depicted as a cape with the hero’s head exposed within the mouth like a helm.  The other story referred to in the poem, Daniel in the Lions’ Den, is the famous Biblical tale.  Daniel is thrown into the den after refusing to give up his worship of God.  God protects him during his time with the lions.  In ancient stories like these, lions are large ferocious man killers.  To survive their encounters, our heroes must rely upon something extraordinary—great strength in the case of Heracles and great faith with Daniel.  Our poetic lion gets the added twist of a serpent tail.

Email ThisBlogThis!Share to TwitterShare to FacebookShare to Pinterest
Labels: Lion, The Poem Beasts