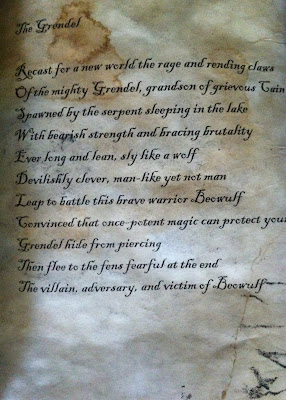 Transcription:
Recast for a new world the rage and rending claws
Of the mighty Grendel, grandson of grievous Cain
Spawned by the serpent sleeping in the lake
With bearish strength and bracing brutality
Ever long and lean, sly like a wolf
Devilishly clever, man-like yet not man
Leap to battle this brave warrior Beowulf
Convinced that once-potent magic can protect your Grendel hide from piercing
Then flee to the fens fearful at the end
The villain, adversary, and victim of Beowulf

Historical Background:
The figure of the Grendel rises from the ancient epic poem Beowulf. Although exact details of his appearance are sparse within the poem itself, Grendel is commonly assumed to have the form of a monstrous humanoid similar to a troll or ogre (although some scholars also argue that he may have had some dragon-like qualities as well, based on a line about a scaled arm). While we may not know many visual details, we are very well acquainted with some of his powerful attributes. He had incredible strength and was able to shrug off sword blows. Also, he can be assumed to have been sneaky, choosing to carry off Herot’s occupants at night when they were most defenseless. Grendel and his equally monstrous mother were both defeated by the hero Beowulf.

Email ThisBlogThis!Share to TwitterShare to FacebookShare to Pinterest
Labels: Grendel, The Poem Beasts