Several weeks ago, I added a Maurice Sendak quote to the right column of this blog:

“There’s something I’m finding out as I’m aging—that I am in love with the world.”

I hope I can say something similar when I’m 83.  More than anything, I want to continue falling ever more deeply in love with the world.

The quote comes from an interview that Terry Gross conducted with the beloved children’s author and illustrator on Fresh Air, a popular National Public Radio program.  Almost more an intimate talk with a friend than a standard interview, Sendak openly acknowledged his failing health and advancing age, taking the opportunity to say goodbye to his host with an eloquence that is deeply moving.

Unable to come to the studio, Sendak spoke from his home, mentioning in passing that even walking has become difficult.  He’s confined in space, looking out the window at the trees—but he even finds joy in this.

“It is a blessing to get old.”

But side-by-side with the blessing is the overwhelming melancholy of loss.  It’s his King Lear interview, as he strives to express the fragility, irrationality, and comedy of life.  The knowledge of death informs the interview.  He wears his vulnerability bravely.

While I respect Sendak’s atheism, his last words of the interview sound like a blessing—a benediction from the heart:

This is my 200th entry on 21 Essays.  I hope to keep it going for at least thirty more years, until I’m turning 83 and considering a series on the beautiful maples outside my window.

If you haven’t heard it, enjoy the interview!  And have tissues handy.  Here’s a link to the full 18-minute interview at the NPR site (click on “Listen to the story.”).

And here’s a sweet tribute to the interview by Christoph Niemann, creatively illustrating the last five minutes of the interview: 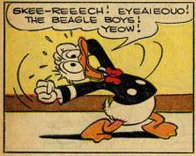 Guest contributor:  Waldemar Hepstein is an artist for No Comprendo Press, a publisher of alternative comics.  Hepstein’s work has appeared in the magazine Fidus and is collected in albums such as 'Snork.’

For golden age comic book buffs, Carl Barks (1901-2000) is the legendary “Good Duck Artist,” a moniker that took hold long before his name became publicly known.  In 1950, when the publishers briefly took him off his regular spot at Walt Disney’s Comics and Stories because they wanted him to concentrate on the longer stories, readers complained and demanded that the anonymous “good artist” be re-installed to do his monthly 10-page Donald Duck lead-in story.

Barks, who wrote and illustrated comic book stories about the Disney ducks from 1942 to 1966, agreed with critics that his most creative period was around 1950.  As is sometimes the case with artists, inspiration seemed to be especially strong in a period of great personal stress and turmoil.  This was the time when Barks was struggling in a rapidly deteriorating relationship with an alcoholic wife.  He once stated that he could feel his creative juices flowing as the whiskey bottles hurled at him by his wife flew by his head.


It was during the period of their divorce that Barks created some of his most beloved stories and famous characters:  Gladstone Gander, the Beagle Boys, and Gyro Gearloose.  The circulation of Walt Disney’s Comics and Stories also peaked at this time, exceeding three million, making it the all-time best-selling comic book title in the .  Let’s take a closer look at one of Barks’ classic short stories, The Terror of the Beagle Boys, from the November 1951 issue (#134) which introduced the Beagle Boys.

It’s an atypical story in some ways, being much slighter on plot than Barks’ other stories from the period and unexpectedly veering into sheer surrealism.  Almost entirely a two-duck act, it brings to the fore Barks’ mastery in “directing” his character comedians:  Both Donald and Uncle Scrooge turn in Oscar-worthy performances in this one.

The story opens in Scrooge’s main office in his famed money bin (incidentally, making its premiere appearance in this story).  Donald is employed by Scrooge as a professional worrier, required to walk around the office moaning and wailing and tearing his hair.  However, neither of them can recall what they were supposed to worry about until an ancient messenger boy (addressed by old Scrooge as “Sonny”) delivers a message from the police that the fearsome Beagle gang are on the loose.

A hilarious sequence follows in which the two ducks—over several pages—struggle to keep awake as they guard the money bin with an old cannon and try to think up ways to foil the crooks.  Barks must have enjoyed drawing scenes like these;  several other stories also center on drowsy ducks required to stay awake for prolonged periods.  Finally Donald hits upon the idea of rigging a Rube Goldberg-inspired contraption to the cannon so it will set itself off when the door is opened.

The audacious finale has Scrooge accidentally setting off the mechanism, whereupon the cannon ball flies through several buildings before hitting a mattress factory, where it bounces off the mattresses, now taking the exact same course in reverse.  Finally it cracks open the walls of Scrooge’s money bin, unleashing an avalanche of cash into the street where the Beagle Boys happily scoop it up.

None of the other Disney comic book artists ever rivaled Barks’ remarkable ability to make his characters live and breathe, or matched the elegant timing he exhibited in telling his stories.  Part of the reason may be Barks’ previous experience in the Disney animation department.  As part of the original Duck team in the late 1930s and early 1940s, he had worked not only as gag writer and co-scenarist, but for all intents and purposes he served as co-director of some of the very best Donald Duck cartoons, including such titles as Good Scouts, Donald’s Snow Fight and Timber.

In addition, Barks received a very rare measure of respect from his publisher. Respectful of his special talent, they largely trusted him to script and draw his stories with a minimum of editorial interference—a set-up that would be almost unthinkable today, especially with Disney.

Along with his fanciful adventures set in faraway places, Barks, who by many accounts could be quite caustic and cynical, took delight in smuggling in quite a bit of social satire.  It’s not as surprising as it may seem at first that Carl Barks and Robert Crumb, the most famous of the new wave of “underground” cartoonists, were in fact mutual admirers.

A new books series from Fantagraphics recaptures the world of Carl Barks, a fitting place to start for any of you lucky devils who are just discovering the supreme duck artistry of Carl Barks.

Email ThisBlogThis!Share to TwitterShare to FacebookShare to Pinterest
Labels: 1951, Carl Barks, Donald Duck, The Terror of the Beagle Boys 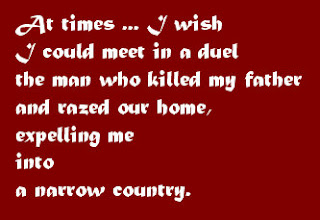