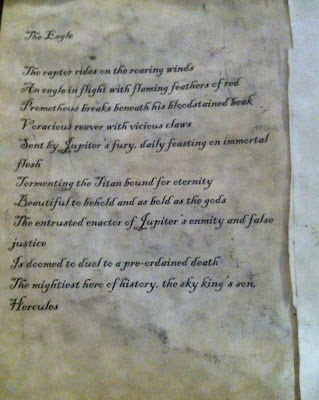 Transcription:
The raptor rides on the roaring winds
An eagle in flight with flaming feathers of red
Prometheus breaks beneath his bloodstained beak
Voracious reaver with vicious claws
Sent by Jupiter’s fury, daily feasting on immortal flesh
Tormenting the Titan bound for eternity
Beautiful to behold and as bold as the gods
The entrusted enactor of Jupiter’s enmity and false justice
Is doomed to duel to a pre-ordained death
The mightiest hero of history, the sky king’s son, Hercules

Historical Background:
The eagle and the bull are the two most important animal symbols of Zeus (known as Jupiter in Roman times). When Prometheus stole fire from Olympus to give to humanity, Zeus grew enraged and had the disobedient Titan bound to a rock at the end of the earth, apparently located in the . Each day, an eagle would come to peck out Prometheus’ liver and each night his liver would regenerate. The intention was for this torture to continue into eternity. He was eventually freed by Heracles (Roman name: Hercules) who slew him with an arrow given to him by Apollo. According to the playwright Aeschylus, Heracles prayed, “May hunter Apollo speed my arrow straight!”

Email ThisBlogThis!Share to TwitterShare to FacebookShare to Pinterest
Labels: Eagle, The Poem Beasts