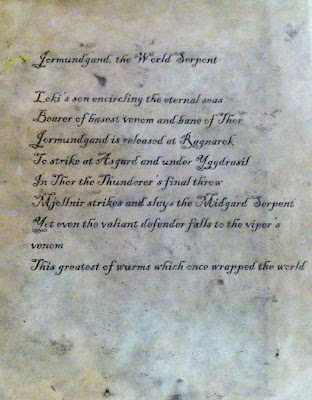 Transcription:
Loki’s son encircling the eternal seas
Bearer of basest venom and bane of Thor
Jormungand is released at Ragnarök
To strike at Asgard and under Yggrdrasil
In Thor the Thunderer’s final throw
Mjölnir strikes and slays the Midgard Serpent
Yet even the valiant defender falls to the viper’s venom
This greatest of wurms which once wrapped the world

Historical Background:
Jormungand (or Jormungandr) was a son of Loki by the Ice Giantess (or jotunn) Angrboda. He is the serpent brother of the Fenris Wolf and Hel, their sister who rules the Viking underworld. Jormungand is a monstrous serpent so great in length that the Norse deities were able to wrap him around Midgard (the realm of humans) with the snake able to bite his own tail at the other end. Images of Jormungand are often comparable in appearance to the Ouroboros, the tail-biting circular serpent that is used by some to represent completion or totality. At Ragnarök (the end of this age in Norse mythology), Jormungand is said to be the killer of Thor in a fight of mutual destruction. Thor falls in a bath of venom sprayed from the snake’s mouth, even as its head is crushed by Thor’s great hammer, Mjölnir.

Email ThisBlogThis!Share to TwitterShare to FacebookShare to Pinterest
Labels: Jormungand, The Poem Beasts