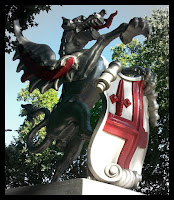 London blogging:
Essay 2 of 10 on
ten artifacts
that I saw
while on vacation
in London
in summer 2015.

There aren’t many testaments to the achievements of 19th century women in the British Museum.  In those days, the British Royal Society and its offshoots acted as gatekeepers for recognizing scientific achievement, with their memberships strictly closed to women and lower-class riff-raff.  Science and exploration were activities reserved for gentlemen.

So who let Mary Anning in?

In gender-suppressing, class-conscious early 19th century England, Mary Anning forced her way into the museums and science books by sheer genius of observation.  Better-educated men trolled the countryside for fossils, but lower-class, under-educated Mary ran circles around them.  She was so good they eventually had to take notice.

While preparing for our London vacation, a friend had advised me to check out the rather drably titled Enlightenment Gallery at the British Museum.  It’s where the museum displays many of the original collections gathered during its early years, imposingly displayed in the King’s Library (which really WAS home to the King’s Library, being George III’s collection donated to the British Museum by George IV).  Row after row of display cases stand as silent testimony to England’s greatest scientists and explorers when the Empire was at its peak.

I settled in to pay my respects at the Mary Anning display case.  Raised in a poor family that earned a little extra cash each summer by selling fossils to tourists visiting Lyme Regis, Mary was just 12 years old when she and her brother Joseph made their first great discovery—a remarkably intact fossilized icthyosaur skeleton from the long-ago Jurassic world.  At a time when would-be amateur geologists and paleontologists were scouring England for prize specimens, Mary Anning nurtured a talent for finding the very finest pieces.  Although lacking formal education, she intuitively grasped the biology of the strange animals that she discovered along the limestone and shale cliffs that lined the Lyme Regis coast.

On long-time loan from the Natural History Museum, London, the little sampling of icthyosaur bones in the British Museum display cabinet came from a later 1821 discovery, when Anning was slowly gaining a reputation for being uncommonly knowledgeable and talented.  As the label in the display cabinet describes:  “Her knowledge and expertise were sought by the most important geologists of the day.”

Several days later at the Natural History Museum, I enjoyed seeing fossils associated with prominent and respected Victorian scientists such as Gideon Mantell, William Buckland, and Sir Richard Owen, but their antique fossil discoveries didn’t thrill me a tenth as much as stumbling upon more Mary Anning tributes, including a complete Plesiosaurus skeleton discovered by Anning when she was 25.

If, as Martin Luther King Jr. observed, the arc of the moral universe is long but bends toward justice, then Mary Anning is now justly receiving her due in 21st century British museums.

After we returned home and shared pictures of our trip on Facebook, a friend of my wife’s inquired if we knew about Remarkable Creatures, a recent novel by Tracy Chevalier, best-selling author of Girl With a Pearl Earring.  Well, I’ve been reading about Mary Anning all my life, starting with my earliest dinosaur picture books, so I couldn’t resist.  Remarkable Creatures is a fine addition to the Mary Anning legend and a fitting tribute to one of the 19th century’s most remarkable pioneers, who fearlessly ventured back into time along the rocky ledges of her little tourist town.