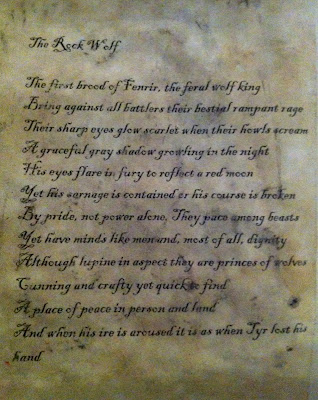 Transcription:
The first brood of Fenris, the feral wolf king
Bring against all battlers their bestial rampant rage
Their sharp eyes glow scarlet when their howls scream
Or a graceful gray shadow growling in the night
His eyes flare in fury to reflect a red moon
Yet his carnage is contained or his course is broken
By pride, not power alone.  They pace among beasts
Yet have minds like men and, most of all, dignity
Lupine in aspect they are princes of wolves
Cunning and crafty yet quick to find
A place of peace in person and land
And when his ire is aroused it is as when Tyr lost his hand

Historical Background:
While wolves are a common motif in mythologies worldwide, the wolves described in this poem are most connected to the Viking (or Norse) traditions. By far, the most famous canine in Norse mythology is the Fenris Wolf, a son of Loki by the ice giantess (or jotunn) Angrboda. Fenris was bound until Ragnarök (the end of the current age) by the magical silken band Gleipnir, although in the course of the binding Fenris tore the hand off the brave Norse deity Tyr. At the time of Ragnarök, the Fenris wolf will escape and kill Odin, then in turn be killed by Vidar. The other major wolf to appear in the Viking tales is Garm or Garmr who is said to guard the underworld. This bloodstained wolf is sometimes said to be loosed at the end of things, ultimately dying while killing Tyr.