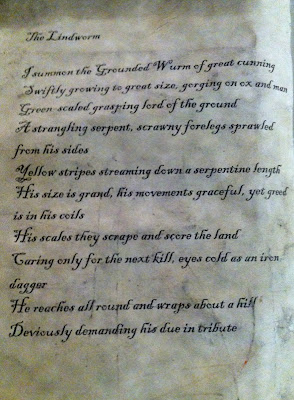 Transcription:
I summon the Grounded Wurm of great cunning
Swiftly growing to great size, gorging on ox and man
Green-scaled grasping lord of the ground
A strangling serpent, scrawny forelegs sprawled from his sides
Yellow stripes streaming down a serpentine length
His size is grand, his movements graceful, yet greed is in his coils
His scales they scrape and score the land
Caring only for the next kill, eyes cold as an iron dagger
He reaches all round and wraps about a hill
Deviously demanding his due in tribute

Historical Background:
The lindworm (or lindorm), literally meaning “constrictor snake,” has its roots in the ancient Viking tongue. Related words are sometimes translated as dragon or serpent. The Lindworm is often portrayed in British heraldry as a large snake-like dragon that possesses a potentially venomous bite, may have two front legs but no rear legs, and generally has no wings (in contrast to a back-legged and winged wyvern). It is only rarely accounted as a fire breather, more commonly using its crushing coils and venom to overcome would-be heroes. The tale of the Lambton Worm is one of the classic depictions of this particular breed of dragon, and was the inspiration for Bram Stoker’s short story “The Lair of the White Worm.” In the story of the Lambton Worm, John Lambton must wear spiked and bladed armor to fight the beast and protect himself from its wrapping—but the protection carries a curse: He must kill the first living creature he sees after his victory or be cursed for nine generations. Because his father is the first one he sees, Lambton resigns himself and subsequent generations to the curse.

For an additional Lindworm treat, here’s Emilio Perez Machado and Stephen Powys performing “The D’AmptonWorm” from Ken Russell’s The Lair of the White Worm (1988).

Email ThisBlogThis!Share to TwitterShare to FacebookShare to Pinterest
Labels: Lindworm, The Poem Beasts