Daffy-blogging, essay 15 of 15 blog entries on 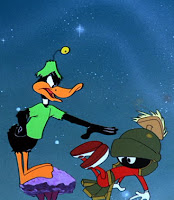 A friend at the International Move Database (IMDb) Classic Film message board responded in dismay when I proposed launching this Duck Dodgers series.  He said he saw no value in deconstructing Daffy Duck.  I completely understand that sentiment.

Viewed simply as a comedy, Duck Dodgers in the 24 ½th Century (1953) is one of the great animated shorts.  It succeeds in delivering the laughs.  And it looks fantastic while doing so.

But I’m diving into the deeper waters nevertheless.  I’ve read enough of Chuck Jones’ writings to know that this guy was no intellectual slouch.  In addition to being very funny, Jones was politically aware, artistically sensitive, and philosophically astute.  He wanted his movies to have resonance.

With these contemporary events in mind, it’s difficult not to see an arms race subtext in Duck Dodgers.  As Duck Dodgers and Marvin (the two Planet X superpowers) face off, their weapons get progressively more destructive.  With these two at the controls, there is no deterrence effect from an assumption of mutually assured destruction.  They blithely destroy the world, with Daffy cackling as he pulls the lever.

I think we can assume that Acme Products continues to receive billions of dollars in no-bid contracts from the Pentagon to this day.

I love literal cliffhangers—movies that build to a climax where the lead characters literally hang from a great height, dangling over an abyss.

This image is one of the great existential metaphors.  It reminds us that we’re all hanging over a metaphorical abyss—it’s the nature of life.

This metaphor is operating when a villain
clings to the Statue of Liberty in Saboteur (1942) and when Eva Marie Saint clings to Cary Grant’s hand on the edge of , but I don’t think you can surpass the latent power of the image than when you place the characters dangling over infinite space.  And to work most effectively as a metaphor, you leave them there with no resolution, suspended forever.

This is exactly what Duck Dodgers does.  It’s double-edged.  Close one eye to the comedy, and you’re left with a bleak and frightening vision.

Iris out on Porky, and the carnival music roars back reminding us that it’s all just good cartoon fun.

That’s all there is, folks!


Daffy-blogging, essay 14 of 15 blog entries on

1.  24 1/2th—I love that 1/2th
2.  The opening crane shot that introduces the space city
3.  The office is on the 17,000th floor
4.  The giant eye
5.  The “Unknown” cloud where Planet X is located on the map
6.  The way Daffy says, “Indubitably”
7.  The Evaporator that leads “To Studio”
8.  The floppy antennae on Daffy’s and Porky’s head coverings
9.  Porky calls Dodgers “Your heroship, sir.”
10.  Daffy’s sheepish expression after he puts rocket in reverse
11.   “South by downeast” in Daffy’s directions to Planet X.  Downeast???
12.  The X trees on Planet X
13.  The cloud X on the mountain behind Marvin’s spaceship
14.   “Little does he realize that I have on my disintegration-proof vest.”
15.  Daffy’s vest turns from green to red during the disintegrator blast
16.  Porky’s Acme Integrating Pistol
17.  Daffy gets so angry at Porky that he sticks his hand through his head
18.  Porky doesn’t mind that Daffy’s hand went through his head
19.  Daffy’s disintegrating pistol that disintegrates
20.  Porky calls Marvin, “You thing from another world”
21.  Marvin standing on a pile of books to reach his weapon of mass destruction
22.  The bedraggled uniforms of our heroes after the explosion
23.  The roots that dangle off the bit of dirt left of the planet at the end
24.  Final iris-out on Porky
24½.  All this in 6 minutes and 55 seconds


Daffy-blogging, essay 13 of 15 blog entries on

Part One, Directions to Planet X


I used to think Marvin the Martian was a parody of aliens in 1950s science fiction movies but I was wrong.  Marvin predates them.  Marvin came first.

In the old-style science fiction serials and pulp magazine stories, intelligent aliens were usually human.  For instance, Flash Gordon’s nemesis Ming the Merciless is your typical evil human mastermind who just happens to live on another planet.

Marvin the Martian has the build of one of Warner Bros. trademark short human villains but—except for the expressive eyes—his face is an otherworldly black void.  He has no mouth and only the barest suggestion of nostrils.  (Incidentally, he must have been the easiest character to animate since the animators never had to match a mouth to the dialogue!)

In his book Chuck Reducks, Chuck Jones suggests that the source of Marvin’s face was something very un-humanlike indeed.  He writes:  “Then, I figured, black ants are scary, so I put an ant-black face and a couple of angry eyes inside his helmet.”
The perfect roundness of Marvin’s head suggests an ant as well.

Approached realistically, this would be a radically creepy alien.  So that’s where all the light touches come in, allowing Jones to play up the comedy.  Marvin gets decked out with a scrub brush on his helmet and over-sized sneakers on his feet.  Above all, the large anime-sized eyes are able to vividly convey his most frequent mental activities—conniving and confusion.

In Haredevil Hare (1948) and The Hasty Hare (1952), Marvin travels with a pet alien dog/assistant called K-9.  But in Duck Dodgers the cast is kept to a minimum, dispensing with the presence of the cute but unnecessary K-9.

Perhaps Marvin can also be seen as a precursor of Star Trek’s iconic Mr. Spock in his comically unemotional responses to all setbacks.  While Marvin sometimes says that he is angry, his emotions remain under tight control when compared to characters like Daffy and Bugs.  The pragmatic Marvin simply goes back to work, diligently planning the destruction of Daffy or the Earth or anything else that he’s irritated by.  Putting aside his destructive tendencies, there really does seem to be something Vulcan-like in Marvin’s eminently practical approach to dealing with life’s unexpected obstacles.


Daffy-blogging, essay 12 of 15 blog entries on

In Duck Dodgers in the 24 ½th Century (1953), Porky plays the “eager young space cadet,” looking very young for his years.  In his introductory shot, he looks downright baby-ish.

Porky was an odd candidate for stardom.  His only distinguishing characteristic was his stutter.  Aside from that, his age varied, his weight shifted wildly, and his character changed to fit the short.  But, somehow, stardom was his destiny.  When the Warner Bros. team started having him stutter “Abba-de, abba-de, abba-de, Th-that’s All Folks!” at the close of every
Looney Tune, his immortality was assured.

Porky was always a different kind of star.  Both Daffy and Bugs could easily carry a picture—they had “leading man” personalities.  As parts for Daffy and Bug grew, Porky receded into supporting roles under directors Tex Avery, Frank Tashlin, and Bob Clampett in the 1940s.

Chuck Jones struggled to find a comic personality for Porky that he could identify with.  Through trial and error, Jones eventually decided to stress the role of Porky as an “observer.”  Jones explained this new identity for Porky in his book Chuck Reducks:


“The role became significant in Duck Dodgers, in which (Porky) acts as Daffy’s assistant.  The film’s leading man could not appear heroic unless he had somebody to bounce off of, and a character such as Daffy required someone relatively meek for the role.  Porky, responding on behalf of the audience, makes us realize the true craziness of what we are seeing.”

While Daffy and Porky were sometimes teamed as partners in the 1940s, Porky’s new role as a wiser observer appears to have debuted in Drip-Along Daffy in 1950.  Daffy plays the western-type hero and Porky is the stubble-bearded comic relief, riding behind on a donkey.  As with his space cadet in Duck Dodgers, Porky plays the character who can actually read the unfolding situation correctly and win a confrontation with the villain.  In Drip-Along Daffy, Porky defeats villain Nasty Canasta by sending a toy soldier out to fire a gun at him.  In Duck Dodgers, Porky hands a stick of dynamite to Marvin the Martian and the ruse works.

The new Daffy-Porky relationship continued to develop through at least two more excellent Jones Unit cartoons, Deduce, You Say (1956) with Daffy as Dorlock Holmes and Porky as Watkins and Robin Hood Daffy (1957) with Porky as Friar Tuck.


Daffy-blogging, essay 11 of 15 blog entries on

Watching Duck Dodgers in the 24 ½th Century (1953), few people complain that the ground of Planet X is pink and purple.  Or that the sky is more green than black.  We sense that Daffy Duck, Porky Pig, and Marvin the Martian naturally fit into this off-kilter world and we go with it.  It took time for to realize that audiences would accept a non-realistic approach to cartoon backgrounds.  More than anyone, Maurice Noble pushed background stylization into the mainstream.

The characters of Bugs, Daffy, and Elmer were well-understood by the time that Noble arrived at the Warner Bros. Studio in mid-1950.  But while the characters were fully formed, the background landscapes that they moved through were less firmly established.  At first, Warner Bros. strived for the realism of mid-1930s Disney backgrounds, albeit with fewer resources and lower budgets.  Then, in the 1940s,
Chuck Jones and others began experimenting with more stylized backgrounds.

In his essential book Hollywood Cartoons, Michael Barrier recalls the instructions that Chuck Jones issued to his background artist Earl Klein in the mid-1940s.  According to Klein, Jones requested the following approach toward background art:  “Look, use exaggerated perspective, and think of it as a flat two-dimensional design instead of trying to get fake aerial perspective.”  Furthermore, Klein said that Jones encouraged the use of “way-out color.”

In later years, Noble would sometimes downplay the influence of previous Warner Bros. animators and the UPA cartoons on his work.  However, his boss Jones was always keenly aware of innovations emerging both within their own studio and at their rivals.  Jones embraced the idea of greater abstraction and he hired Noble because he sensed that Noble could do these new striking backgrounds better than anyone.

Great artist though he was, Maurice Noble didn’t arise from a vacuum.  Artists were putting their unique signatures on backgrounds since the beginning of animation.  Experimentation bloomed in the 1940s, with some of the most envelope-pushing ideas arising from the Chuck Jones’ unit.

Here’s a selection of some great backgrounds from cartoons of the 1940s and early 1950s that paved the way for the work of Maurice Noble at Warner Bros.


Daffy-blogging, essay 10 of 15 blog entries on

Maurice Noble’s background artistry floors me every time.  Consistently across dozens of cartoons, his background layouts are wonderfully playful and beautifully designed.  Duck Dodgers in the 24 ½th Century offers a thrilling series of futuristic alien landscapes, perfectly supporting the comedy in the forefront while capable of
being viewed as remarkable stand-alone works of art.

Here’s a sampling of eye-boggling art that was designed by Maurice Noble and, in most cases, painted by Warner Bros. background painter Philip De Guard.


(Both this entry and tomorrow’s blog entry are particularly indebted to Hollywood Cartoons: American Animation in its Golden Age by Michael Barrier and Stepping Into the Picture: Cartoon Designer Maurice Noble by Robert J. McKinnon, two of the finest works written on classic cartoons.)