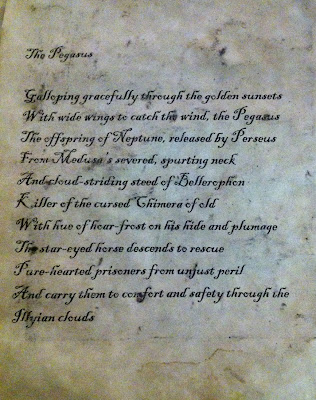 Transcription:
Gliding gracefully across golden sunsets
With wide wings to catch the wind, the Pegasus
The offspring of , released by Perseus
From Medusa’s severed, spurting neck
And cloud-striding steed of Bellerophon
Killer of the cursed Chimera of old
With hue of hoar-frost on his hide and plumage
The star-eyed horse descends to rescue
Pure-hearted prisoners from unjust peril
And carry them to comfort and safety through the Illyian clouds

Historical Background:
The winged horse Pegasus is a famous image whose background myth often goes unmentioned in popular culture.  The story of Pegasus begins in the rivalry between Poseidon (lord of the sea, with the horse as his animal symbol) and Athena, the virgin goddess of war and wisdom.  Poseidon made love with a woman in a .  Revenging this sacrilege, Athena transformed the woman (named Medusa) into a snake-haired Gorgon whose eyes turned onlookers into stone.  Eventually Medusa was killed by Perseus, and an unexpected offspring, the winged horse Pegasus, leaped from her severed neck.  Pegasus would go on to assist a variety of heroes besides Perseus, most notably Bellerophon of Corinth who killed the Chimera.  The Olympian gods immortalized Pegasus as one of the great constellations.

Email ThisBlogThis!Share to TwitterShare to FacebookShare to Pinterest
Labels: Pegasus, The Poem Beasts