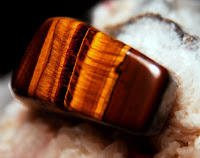 “Every one noticed her eyes;  the brown iris had golden glints that made them look like gold-stone, or, in softer lights, like that mineral called tiger-eye.”

O Pioneers! by Willa Cather
Part I, Chapter I

This description comes from a passage reflecting the point of view of Alexandra Bergson, the book’s heroine.  Later in the book, Cather returns to the subject of Marie’s eyes, this time through the perspective of Alexandra’s friend Carl Linstrum.

“Carl had never forgotten little Marie Tovesky’s eyes, and he was glad to have an opportunity to study them.  The brown iris, he found, was curiously slashed with yellow, the color of sunflower honey, or of old amber.  In each eye one of these streaks must have been larger than the others, for the effect was that of two dancing points of light, two little yellow bubbles, such as rise in a glass of champagne.”
O Pioneers! by Willa Cather
Part II, Chapter VI

That slash of yellow suggests a cat’s eye, or maybe a tiger’s eye.

It’s the two artists, Alexandra and Carl, who notice Marie’s eyes.  Alexandra is an artist of the land just as Carl is an artist and craftsman, albeit an unsuccessful one.  Curiously, Marie’s lovers—Frank Shabata and Emil—are never given equivalent opportunities to pay respect to Marie’s fascinating eyes.

There are two significant mentions of Marie’s eyes during her scenes with Emil.  When Marie teases him at the graveyard in Part II, “her dancing yellow-brown eyes bubbled with gayety.”  (Notice how that description is later echoed in the mention of champagne in Carl’s passage, quoted above.)  Then in the final Marie-Emil scene when he comes to her in the orchard, she is lying on her side under the white mulberry tree and “her amber eyes opened slowly.”  Somewhat unobservant up to this point, Emil looks deep into her eyes this time:   “…in them Emil saw his own face and the orchard and the sun.”

When Ivar finds their bodies the next morning, Marie’s eyes are lightly closed, “as if in a day-dream or a light slumber.”  And this echoes Marie’s last words in the book, spoken as she awakens and Emil peers into her eyes:  “ ‘I was dreaming this,’ she whispered, hiding her face against him, ‘don’t take my dream away!’ ”

Willa Cather’s word choices are beautiful;  her subtle repetitions and echoes are exquisite.  While nothing is over-stressed, the total effect becomes almost symphonic as the imagery and themes crescendo toward the emotionally devastating conclusion.  This is the work of a master writer, confidently in control of her art.