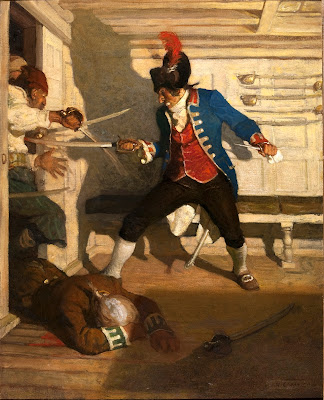 (1882-1945)
The Siege of the Round-House, It came all of a sudden when it did, with a rush of feet and a roar, and then a shout from Alan, 1913
Illustration for Robert Louis Stevenson,
Kidnapped; Being Memoirs of the Adventures of David Balfour in the Year 1751
(New York: Charles Scribner’s Sons, 1913)
Brandywine River Museum
Bequest of Mrs.
Russell G. Colt, 1986

The () is the last place you’d expect to find a nude descending the staircase. As I suggested in an earlier entry on N. C. Wyeth, the museum’s central spiral staircase is more of a place where “Dick and Joanna might descend to the dungeon, crossbow at the ready.” A cubist nude would be wildly out of place clattering down these steps. The is a space for Wyeths and Howard Pyles, not Duchamps.

Marcel Duchamp hit big in in 1913, one hundred years ago. His famous nude descended a staircase at the International Exhibition of Modern Art, aka the Armory Show of 1913, and that was the signal for the modern art party to begin. N. C. Wyeth wasn’t there. While the Armory Show was drawing crowds, Wyeth was in attending a flower show.

It’s simplistic to divide American art into pre-Armory Show and post-Armory Show, but there’s some justification for it. In the years immediately following the Armory Show, modern art took hold in the . Even though many mainstream reviewers mocked the works of Matisse, Picasso, and, above all, Marcel Duchamp, young artists saw new possibilities. The new fine art was going to be abstract; realistic narrative art like Wyeth’s was old-fashioned—good enough for magazine covers.

It’s difficult to imagine that Wyeth was unaware of Duchamp’s highly controversial Nude Descending a Staircase (No. 2), the most scandalous of the Armory Show paintings. It was pilloried in print and mocked in cartoons. Even if he didn’t see reproductions of the work itself, he must have seen caricatures that caught its central concern—capturing movement over time. Duchamp took the fascinating stop-motion photographic studies pioneered by Eadweard Muybridge in the late 19th century and rendered his interpretation in a Modernist style, showing the influence of emerging European art movements like Cubism and Futurism.

Movement depicted over time…  A wildly iconoclastic thinker, Duchamp toyed with the concept, converting photographic truth into an utterly original Modernist statement. It’s hard to imagine anything further from Wyeth.  Except…

What was Wyeth thinking when he painted that sword slashing downward through the air, with its motion suggested by a rapid-fire succession of pale brush strokes? It’s not Wyeth’s usual precision snapshot approach—this 1913 painting shows movement depicted over time, Wyeth-style. He gives us a stop-motion sword movement, while still honing to his realistic presentation in all other regards. In the year that Duchamp offered up his famed nude in descent, Wyeth presented a sword in descent—his subtle contribution to a trendy art world subject.

The Duchamp is a smart, edgy piece. I like it.

But I love the Wyeth.