Alexandra Bergson and the Girl with the White Parasol

“A fellow will remember a lot of things you wouldn’t think he’d remember.”
Sloane as Mr. Bernstein
Citizen Kane (1941)

I’m watching a scene from Citizen Kane, one of the world’s greatest movies, and thinking about O Pioneers! Midway through their stories, both the Orson Welles’ movie and the Willa Cather book pause for a grace moment—the first a story told across a large office desk and the other a memory on the windy plains of . Neither scene is essential to the plot but each lingers in the mind long afterward.

“You take me. One day, back in 1896, I was crossing over to on the ferry, and as we pulled out, there was another ferry pulling in, and on it there was a girl waiting to get off. A white dress she had on. She was carrying a white parasol. I only saw her for one second. She didn’t see me at all, but I’ll bet a month hasn’t gone by since that I haven’t thought of that girl.”

It’s a sublime scene, sensitively acted by Everett Sloane and evocatively written by Herman Mankiewicz. Welles and cinematographer Gregg Toland shoot it straight, with just a slow dolly toward Sloane as he reminisces.

In O Pioneers!, our heroine Alexandra Bergson recalls a similar memory. It comes in the book’s third part, “Winter Memories,” dealing with a lonely time when Alexandra is feeling abandoned, missing the presence of her brother Emil and her friend Carl. She thinks back to a day when she and Emil shared a special moment by the river.  It involved a duck.

“When Emil said he was he was hungry, they drew back from the road, gave Brigham his oats among the bushes, and climbed up to the top of a grassy bluff to eat their lunch under the shade of some little elm trees. The river was clear there, and shallow, since there had been no rain, and it ran in ripples over the sparkling sand. Under the overhanging willows of the opposite bank there was an inlet where the water was deeper and flowed so slowly that it seemed to sleep in the sun. In this little bay a single wild duck was swimming and diving and preening her feathers, disporting herself very happily in the flickering light and shade. They sat for a long time, watching the solitary bird take its pleasure. No living thing had ever seemed to Alexandra as beautiful as that wild duck.”

The wild duck is Cather’s feathered version of the girl with the white parasol. Like the girl, the duck is oblivious to the moment and the person observing her. Here’s the clincher line, where Alexandra sounds like Mr. Bernstein behind his desk, recalling a privileged moment of unexpected beauty:

“Years afterward she thought of the duck as still there, swimming and diving all by herself in the sunlight, a kind of enchanted bird that did not know age or change.”

You might not notice these scenes on first encounter. Not much really happens. But they’re the type of scene that can echo in the midnight hours, when you involuntarily recall a distant memory shared by no one else in the world—your own personal girl with a white parasol or your own wild duck. 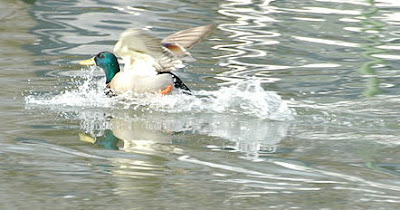