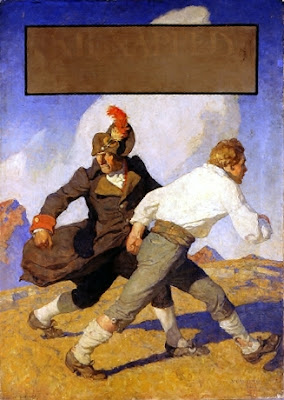 Our two heroes in Robert Louis Stevenson’s Kidnapped: Alan Breck on the left and David Balfour on the right.

A vibrant selection of Howard Pyle paintings are on permanent exhibition on the first floor of the Brandywine River Museum (). They’re the natural starting point for an exploration of the museum. To get to the N. C. Wyeth paintings, you ascend a central spiral staircase* to the third floor. In some ways, the effect is charmingly rural (the building is a renovated 19th century grist mill), but it also summons images appropriate for the tales illustrated by Howard Pyle and N. C. Wyeth. Robin Hood would be at home ascending this staircase with sword drawn, or perhaps Dick and Joanna might descend to the dungeon, crossbow at the ready (one of my favorite N. C. Wyeth illustrations—from The Black Arrow).

The paintings by Howard Pyle should be encountered first—he’s the foundation. Pyle shaped a tradition of artistry that the Wyeth family embraced and ultimately transcended. Pyle was N. C. Wyeth’s greatest teacher and his mentor to the end.

And Pyle’s end came all too soon, just as the 29-year-old Wyeth was riding a mighty crest of critical and popular acclaim. N. C. Wyeth’s magnificent illustrations of  were published in the Scribners Illustrated Classic edition, issued on October 22, 1911. Two and a half weeks later, Wyeth learned that Pyle had died in . Wyeth knew that Pyle was unwell, but was emotionally unprepared for the news that his larger-than-life teacher and mentor, just 58 years old, was dead. A few months later, with the edition a bestseller, Wyeth was approached by Scribners to illustrate Robert Louis Stevenson’s Kidnapped as a follow-up. The art would naturally focus on the two central characters, Alan Breck and David Balfour—the crusty man of experience and his young admirer.

Michaelis’ argument regarding the use of Wyeth’s brother Stimson as a model is rock solid. In a letter to Stimson, Wyeth wrote: “As David Balfour stands there wet and disconsolate …  in the mist and spray on my Isle of Earraid, the form and features of yourself come and go.” Michaelis suggests that Stimson stood in for an idealized self-portrait of Wyeth himself, pictured as a youth on the verge of self-discovery.

The proposal that Alan Breck is a romanticized Howard Pyle is more conjectural, mainly relying upon comparisons between Stevenson’s descriptions of Alan Breck in Kidnapped, Wyeth’s visual interpretations of Breck, and our knowledge of Howard Pyle’s appearance. In the quote at the top of the page, Michaelis compares their faces.

Michaelis follows this with a consideration of their stature. In the Stevenson descriptions, Breck is a foot shorter than David. In contrast, Pyle and Wyeth were both solidly built men, with Pyle standing three inches taller. In Wyeth’s pictures, Alan Breck and David Balfour appear to be about the same height (although Wyeth often depicts Breck from a low perspective, making him appear more imposing—a larger-than-life presence).

Wyeth’s wonderful cover illustration for Kidnapped sets the tone for the novel, conveying its picaresque narrative and its emphasis on the relationship between Alan Breck and David. They are two men determined to take charge of their destinies. While Breck sets the destination and is the wiser from experience, David is the one who takes the lead, boldly moving into the future. Breck casts a look backwards, watching out for them both. If it is a tribute to Pyle, it’s a kind and good-humored one. The colorful feather, a fiery red against the white cloud, perfectly tops the character.


“This (Alan Breck) seems to me a gentleman of some choice qualities, though perhaps a trifle bloody-minded. It would please me none the worse, if (with all his merits) he were soused in the , for the man, Mr. David, is a sore embarrassment. But you are doubtless quite right to adhere to him; indubitably he adhered to you. It comes—we may say—he was your true companion…”
Kidnapped, Chapter XXVII
Robert Louis Stevenson