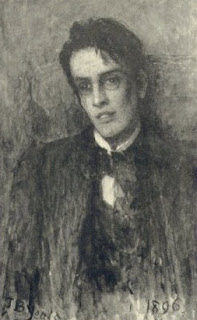 
“For this that all that blood was shed,
For this Edward Fitzgerald died,
And Robert Emmet and Wolfe Tone,
All that delirium of the brave?
Romantic Ireland’s dead and gone,
It's with O’Leary in the grave.”
from “September 1913”
by W. B. Yeats

W. B. Yeats needed a front man like Johnny “Rotten” Lydon to do justice to these punk lyrics. I would have loved to have heard the Belfast punk band Stiff Little Fingers tackle this in their snarling prime. Yeats was born before his time.

“September 1913” (the link is to the full poem at PoemHunter) was Yeats’ vitriolic blast at the middle-class Catholics of Dublin, whom Yeats saw as betraying the revolutionary legacy of men like John O’Leary and Edward Fitzgerald. It helps to know a little background history (the Dublin Lock-Out and the Hugh Lane Bequest are referenced), but I think the gist comes through regardless. Yeats is pissed off.

I don’t have a punk version, but here’s an interpretation that I like a lot. Stephen James Smith is a Dublin poet and playwright. Here he reads Yeats’ poem, accompanied by guitarist and singer Enda Reilly. Smith captures the anger and disgust while Reilly provides the lyricism—a fitting way to approach Yeats when he’s in one of these moods.


If you like that one, try it again with this live performance by Smith and Reilly. The sound isn’t as good so I didn’t want to lead with it. But I love the idea of reciting “September 1913” with a pint of beer in hand.


Scottish musician Mike Scott and his band The Waterboys paid tribute to Yeats on their 2011 album An Appointment With Mr. Yeats, featuring a fairly epic folk-rock take on “September 1913.” It’s pretty good.


But I’m still waiting, convinced that the definitive version will be punk, not folk.

Because when he raged, Yeats was a punk and proud of it. (Check the image at the top. Give him a guitar. Plug it in. Turn it up.)