The Death of a Frog in Pilgrim at Tinker Creek 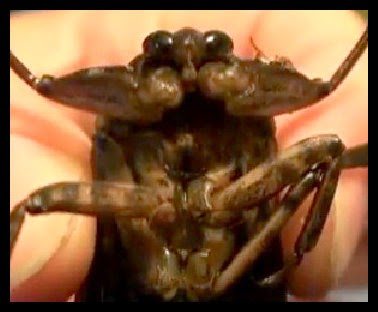 Horror in
Pilgrim at Tinker Creek (1974)
by Annie Dillard 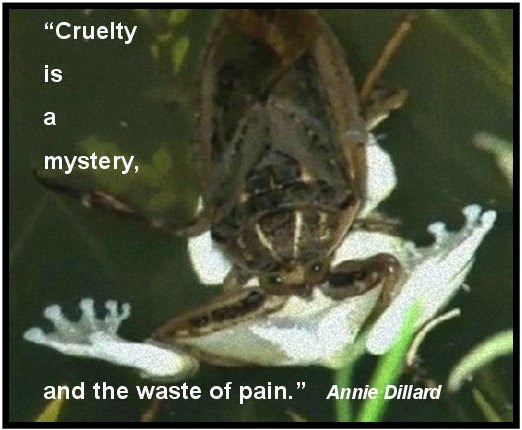 With the pounce of a bloody tomcat, violence is foreshadowed in the first two paragraphs of Annie Dillard’s nonfiction narrative Pilgrim at Tinker Creek.  It’s a classic horror novel opening.  Then Dillard cleverly lulls the reader back into complacency with a pastoral description of a morning stroll down the path to the creek.  Janet Leigh’s heading toward the shower—what could possibly go wrong?

Dillard sits by the flowing creek and in the last sentence of the twelfth paragraph, she returns to Subject A:

“I’m drawn to this spot.  I come to it as an oracle;  I return to it as a man years later will seek out the battlefield where he lost a leg or an arm.”

That’s the transition.  She’s about to unleash the horror.

Some critics compare Pilgrim at Tinker Creek with Thoreau’s Walden, but it reminds me more of Cormac McCarthy’s gore-splattered horror/western Blood Meridian.  McCarthy works out his fixations on the macrocosm of the parched deserts of the American west.  Annie Dillard works with the same themes (a quest for meaning against a backdrop of existential futility) by focusing on the microcosm of life in her backyard.

When Dillard spies a small frog, it’s like that moment in David Lynch’s Blue Velvet where the camera plunges below the manicured lawns.  The sense of order disintegrates.  A seemingly alien world comes into view.

In paragraphs 13 through 17, Dillard observes—and then broods upon—the annihilation of the frog.  Twenty years after reading these paragraphs for the first time, I’m still mesmerized by the passage.  To proceed with this SPOILER, Dillard watches a frog being sucked dry by a giant water bug:

“And just as I looked at him (the frog), he slowly crumpled and began to sag.  The spirit vanished from his eyes as if snuffed.  His skin emptied and drooped;  his very skull seemed to collapse and settle like a kicked tent.  He was shrinking before my eyes like a deflating football.  I watched the taut, glistening skin on his shoulders ruck, and rumple, and fall.  Soon, part of his skin, formless as a pricked balloon, lay in floating folds like bright scum on top of the water...” 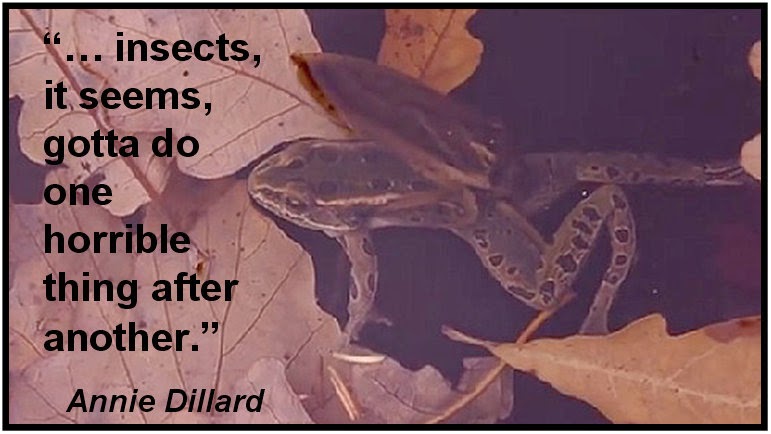 For the rest of the book, Dillard struggles to comprehend a theology capable of encompassing the annihilation of frogs.  If she doesn’t entirely succeed in this quest, her effort is as noble a failure as Herman Melville’s to fully understand the nature of the white whale.  At best, Job-like, we glimpse God’s backside as he departs.  In Blood Meridian, Cormac McCarthy never figures it out either.  These are the themes that you wrestle with till sunrise, leaving you broken and still unsatisfied.

But this is the world we live in, closely observed.  If horror isn’t acknowledged as a neighbor of theology, then the theology is cheap.  The creek is out back;  death waits there.  The frog’s eyes are drained of some undefinable spark, horrific as a transformation in the Invasion of the Body Snatchers.

“I never knew fear until I kissed Becky.”
Invasion of the Body Snatchers (1956)

Like Melville, Dillard assumes the existence of God.  And, like Melville, she is determined to reconcile the Creator with the creation.  The notion of a fallen world does not enter into her equation.  She accepts the world as is and holds God responsible for its cruelties, pain, and death, rejecting any theology that does not acknowledge giant water bugs.

Insects are her test case:

“Fish gotta swim birds gotta fly;  insects, it seems, gotta do one horrible thing after another.” 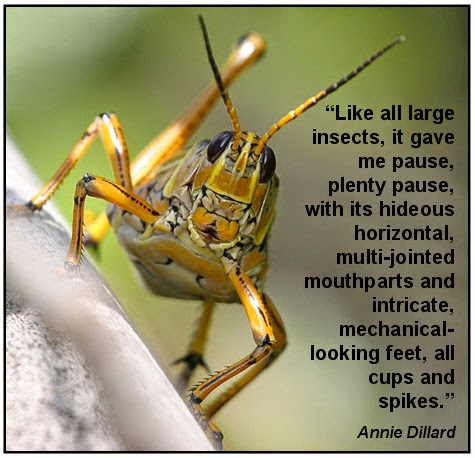 Insects creep, crawl, and fly through the book.  A mutilated Polyphemus moth creeps down a driveway “on six furred feet,” a female praying mantis religiously observes her cannibalistic sex rites, a starving clothes moth larva obsessively molts itself into non-existence, a grasshopper exercises its 18 mouthparts, and there’s an amazing description of a bee being eaten by a wasp being eaten by a mantis.  She teases, pokes, and prods at the idea of insects in her search for profundity.

“I ought to keep a giant water bug in an aquarium on my dresser, so I can think about it.  We have brass candlesticks in our houses now;  we ought to display praying mantises in our churches.” 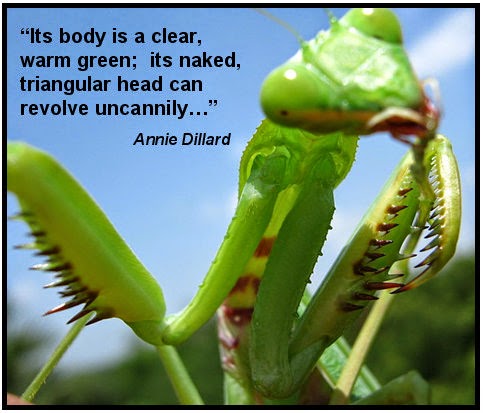 Near the end of his life, Michelangelo painted a self-portrait into his Last Judgment fresco, picturing himself as grotesque folds of flayed skin, his countenance drooping like a kicked tent.  I think the giant water bug caught him at last.  It’s a horrific way to look at life.  There’s no explaining it.

There’s no explaining the death of a frog.