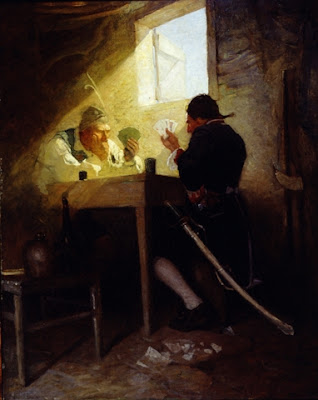 
There’s something very cinematic about the work of N. C. Wyeth.

No, reverse that: There’s something very Wyeth-ian about movies. Something Howard Pyle-ian, too, for that matter.

Master illustrators like Howard Pyle and his students—with N. C. Wyeth very notable among them—were extraordinarily popular at the turn-of-the-century. Before the film industry emerged in the first decade of the 20th century, magazines and books were the most easily accessible medium for escapism in the . And it’s probably inevitable that the images on these magazines and books became etched into the minds of ’s early filmmakers. They learned from this artwork. The incipient filmmakers learned how to frame action; they learned the art of making even relatively unexciting incidents appear visually compelling.

When painting a scene like At the Cards in Cluny’s Cage, N. C. Wyeth would work much like a film director. He posed models, dressed them in period costumes, carefully framed the action, and designed the lighting to heighten the mood and convey the story. A knowledge of theater naturally played into this—with Wyeth’s closet of costumes being particularly theatrical in nature. But Wyeth was much more like a film director than a theater director because so much of the final effect was achieved by his choices of how to position elements within the frame. There’s little of the proscenium stage in Wyeth’s art.

While gambling may be mentally exciting, it’s not visually compelling. In At the Cards in Cluny’s Cage,  the swashbuckling rebel Alan Breck is gambling at cards and losing all the money of our hero, David Balfour, in the process. Bank notes lie crumpled on the floor in foreground, painted without detail but conspicuously visible from this low perspective.

N. C. Wyeth’s use of lighting for this painting is a lesson for budding filmmakers in how to enliven a static scene. The characters are placed around a diagonal stream of bright light that precisely illuminates the details that Wyeth wants to emphasize and casts deep shadows where he wants mystery. Unlike a film director, the painter must capture all the story details in a single image. Everything counts.

An early filmmaker like Douglas Fairbanks (who began building widespread popularity as an actor-producer in 1916, just three years after Wyeth’s illustrated Kidnapped was published) was certainly paying attention. A decade later, when he was at the peak of his Hollywood success, implored N. C. Wyeth to come to to work on his latest swashbuckler The Black Pirate (1926). While Wyeth chose not to go, he wasn’t really needed. The Wyeth influence was already pervasive in the art of filmmaking, and The Black Pirate was just one of many classic movies that worked so well partly because it looked like an N. C. Wyeth painting in motion.