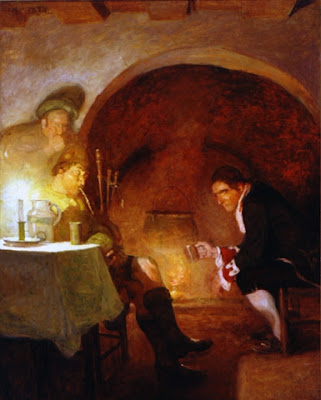 N. C. Wyeth preferred to paint on a large canvas, his standard being nearly four feet high by three feet across. He filled these spaces with telling detail and invention. He worked from a wide color palette, often with great subtlety, sometimes heavily plastering on the oils and at other times so thinly applying them that you could easily see the texture of the canvas.

And then the book publisher reduced the image by 98% (that’s 98%!!!) to create an image just 6 ½ inches high by 5 ¼ inches wide. Details would disappear into shadows. Carefully chosen colors could be altogether altered. “Miserable smudges,” Wyeth called the reproductions of his work published in Mary Johnston’s The Long Roll in 1910.

But, for better or worse, illustration was Wyeth’s chosen career, so he persevered. And thanks largely to the vision of Art Editor Joseph Chapin at Scribners (Wyeth’s main publisher), the art of illustration reproduction began to aspire to a level worthy of the art practiced by the illustrators. The Scribner’s Illustrated Classics series that began with in 1911 set a dramatically higher standard for the industry. Wyeth was delighted.

The quality of the Kidnapped book illustrations in 1913 easily matched that of the triumph. Of course, Wyeth remained acutely aware that the situation remained far from perfect, but he also knew these were the best illustrated books available on the mass market of his day.

Scribners used a sophisticated four-color process. Each painting was photographed through four different filters, with each filter separating out all but one of the primary colors. Wyeth was fully involved in the proofing process, often traveling up to to meet with Chapin and the printers, always striving for a faithful reproduction of the carefully composed art on his canvases.

When I last visited the in January 2013, I was delighted to spend time with their small but very informative exhibit of Kidnapped material, including artist proofs and first editions of the book. Even though I entirely lack the acute trained artist’s eye of a Wyeth, I could easily see the unfortunate changes wrought by the photomechanical reproduction process.

Glancing back and forth, from the canvas of Two Pipers in Balquhidder to the artist’s proof to the book reproduction, I noted the loss of detail in the background hearth. The glowing reds and yellows of the painting were muted in the proof and the book illustration, resulting in an increase of muddied browns and grays.

Printed on a glossy specialty paper, the book illustrations are remarkably well preserved. They look superb. It’s only when you compare the illustrations to the paintings on the wall (a luxury that it’s hard to achieve outside of the !) that you realize the inevitable diminution of his vision that Wyeth had to accept.

This was state-of-the-art color reproduction in 1913 and for that Wyeth had to be grateful.

But imagine the endless compromises involved in signing off on each proof, reluctantly agreeing that each reproduction was good enough.

My low-resolution copies of the N.C. Wyeth book illustrations are via the beautiful high-resolution scans at The Golden Age, one of my favorite art blogs on the internet.