In 2006, I was honored to participate in Aaron Christensen’s mad crusade to publish a book of essays on horror movies written by true horror fans.  Aaron corralled his writers from the knowledgeable, as well as highly opinionated, fans who regularly post on the International Movie Database (IMDb) discussion boards.  Most of the writers came from the estimable IMDb Horror board;  I was among a handful of horror fans more frequently found loitering on the IMDb Classic Film board. 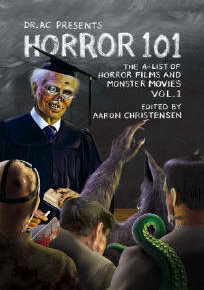 The book, Horror 101 or (the long version) Dr. AC Presents Horror 101: The A-List of Horror Films and Monster Movies, Vol. 1, was published in early 2007 by Midnight Marquee Press.

It’s still in print.  And it’s a fantastic book.  Apparently, we horror fans were inspired by Aaron’s vision because we came through with dozens of great entries on our favorite films.  In all, we covered 110 films in 101 essays.  I made two contributions to Horror 101:  the entries on The Golem (1920) and (1993).

Shortly after Horror 101 was published, I challenged myself to go deeper into The Golem.  Specifically, I dared myself to write an essay a day for 21 days, each covering a different aspect of The Golem.  My original essay in Horror 101 was my springboard.  My goal was to expand it 21 times, like advancing from peering at an insect wing under a magnifying glass to observing it through an ultra-powerful electron microscope.

In revisiting the essay, my inspiration was the film critic Robin Wood.  Back when I was a movie-loving kid in the early 1970s, I bought a copy of Wood’s Hitchcock’s Films and read it to tatters.  It deepened the way I viewed movies.  Many years later, I discovered that Wood had returned to his book, republishing it at double its original length.  The original text remained, but it was surrounded by revisionist commentary, equally as insightful as the text of that first beloved book.  The book’s new name was Hitchcock’s Films Revisited.

So I decided to similarly revisit my Golem essay.  I revisited it first in late 2007 in a series of daily posts on the Classic Film board.  And now I’m revisiting it again with 21 essays in 21 days on my brand new blog, 21 Essays.

Email ThisBlogThis!Share to TwitterShare to FacebookShare to Pinterest
Labels: The Golem