This next excerpt from my Horror 101 essay on The Golem (1920) is focused on Paul Wegener—the movie’s co-director, co-writer, and star. There’s not a lot of biographical information available on him. A biography does exist, but it’s in German and hasn’t been translated into English yet. As usual, I’m wary of putting too much trust in information solely available through the internet.

“The genius of The Golem sprung from a collaboration of some very talented people, namely Paul Wegener, Henrik Galeen, Karl Freund, and Hans Poelzig.

“Paul Wegener was a widely respected leader in the early German film industry, known for his skills as an actor, writer, director, and producer. His first major movie, The Student of Prague, survives today. Released six years before The Cabinet of Dr. Caligari (generally considered the first expressionist movie), The Student of Prague is expressionist in everything except its style, but there it falls dismally short. In fact, it lacks any style, except for a tedious, primitive style reminiscent of the Georges Melies stagebound fantasy shorts of the early 1900’s, drawn out to feature length. Regardless, The Student of Prague was a hit in and internationally, and established Wegener as a major force in the German film industry.

“Obviously fascinated by the Jewish legend of the Golem of Prague, Wegener made three Golem movies: first The Golem in 1915, then a comic variation in 1917 (The Golem and the Dancing Girl), and finally The Golem: How He Came Into the World in 1920. Although the 1920 version is usually grouped with the post-Caligari German Expressionist movies, it can be viewed as the final installment of a trilogy that began well before Caligari was conceived.”

In my Horror 101 essay, I chose not to address one of the most intriguing things about Wegener that I came across in my research. The best biographical information on Wegener that I found on the internet is at this site: 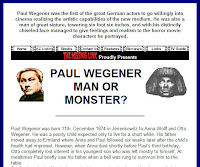 As a pacifist (Mennonite variety), I was particularly interested in this, near the end of the article:

“March 1933 was the start of a great upheaval for . The National Socialists came to political prominence and theatre companies were disbanded, many of the actors and directors arrested, persecuted or exiled. Although a pacifist and unwanted by the new political power, Wegener remained in and continued his work on stage and screen despite the limitations.”

Now, I’m generally suspicious of claims of pacifism.  Unless a little more information is given than this, the term is close to meaningless.  Lacking details on the nature of his pacifism—whether it was ethical, religious, or political—I thought it best to leave out mention of this intriguing little tidbit.

But since then, I’ve been thinking…

The Golem has a very peculiar end. For most of its length, the narrative track is similar to The Cabinet of Dr. Caligari, a huge success made at the same studio in the previous year. Both movies have an eccentric personality creating a monster, hiding it while it’s in its dormant shape, then losing control of it. Naturally, the monster carries off the heroine. In Caligari, the situation is resolved with the monster collapsing from exhaustion after being chased by a lynch mob. This became a standard narrative convention for hundreds of monster movie plots that followed. In the end, society bands together and defeats the beast. In the 1931 Frankenstein, the armed townspeople hunt down the monster and burn the windmill. In King Kong, the monster is gunned down by airplanes. In Dracula, the band of heroic men track down the vampire and destroy it. In The Wolf Man, it’s armed townspeople beating the bushes for the killer wolf in the misty woods. In each case, the monster is defeated by violence.

By contrast, The Golem has one of the most peaceful, diminuendo climaxes in horror movies (or any other genre, for that matter). A child defeats him, unintentionally, simply out of curiosity. A conventional ending would have pitted the Golem against society in an exciting confrontation. And, indeed, such an ending would have been more cathartic and exciting. It probably would have sold more tickets. In commercial terms, it’s a no-brainer. But instead, Wegener and his co-screenwriter Henrik Galeen opted for an ironic, poetic, lyrical end. And perhaps a subversively pacifist end, now that I think about it. Evil is defeated, but not by repaying violence with violence, eye-for-an-eye style. Evil is defeated by innocence. 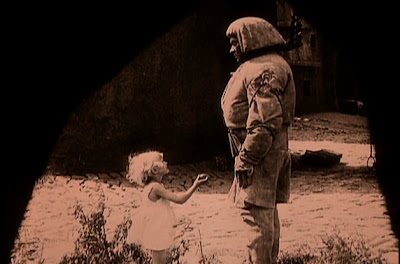 Was this an intentional pacifist choice on the part of the screenwriters? It’s impossible to tell, but intriguing to contemplate. It’s also interesting that no critics appear to have picked up on the underlying pacifist tone of the climactic scene. Instead most critics of the movie have chosen to concentrate on the choice of blonde Aryan children in this final scene (which takes place outside the gates of the Jewish ghetto, so it makes sense that Aryan children will be on the other side). The suggestion tends to be that the scene is mildly anti-Semitic, with Christian children destroying the Jewish monster. Personally, I think that’s more of a stretch than my interpretation. I look at the scene and see poetry and hope, with not a hint of hatred. It’s a beautiful end, nearly unique in the history of monster movies, but then… so few have been made by pacifists.

Email ThisBlogThis!Share to TwitterShare to FacebookShare to Pinterest
Labels: 1920, Paul Wegener, The Golem