The first two scenes with Miriam are very similar in structure. First there’s a medium or closeup of Miriam, either behaving flirtatiously or preening, followed by a shot of a man, Famulus (the Jewish assistant) in the first instance and Florian (the Christian knight) in the second. With Famulus, Miriam openly teases. She approaches him yet stays just out of reach. She seems to enjoy her effect on him as he responds with the confusion of a shy boy.

The flirtation with Florian careens off down a different track. Florian is introduced in the scene at the emperor’s palace, where he is at first indistinguishable from the other smug couriers. Since this directly follows the scene of the devout Jews at prayer, the audience is clued to see the royal court as shallow and hypocritical. When Florian is selected by the emperor to deliver the decree to the Jewish ghetto, Florian becomes the center of the viewer’s attention and the representative of the court. Florian is presented as an indolent fop, the playboy of medieval . As the court’s official representative and carrier of the anti-Jewish decree, Florian fills an essentially villainous role at this point.

Miriam seems to telepathically sense Florian’s approach. From her upstairs bedroom, designed in a delicate pre-Raphaelite style, Miriam fits the iconographical image of the princess locked in a tower chamber, awaiting rescue. The sight of her leaning out the window, in search of a knight to rescue her, is pure storybook. When Florian looks up, the movie’s most highly-charged sexual flirtation is on.

Florian is memorable for the long-stemmed flower he likes to play with between his lips and for the out-size feather that springs from his hat. Are these intentional phallic symbols? Usually, I choose to bypass Freud and assume that a cigar is just a cigar, so my first inclination is to regard these objects as yet another lively aspect of the movie’s imaginative production design.

But then the chalice arrives…

Miriam enters the room, carrying a bowl of fruit and a chalice. Florian stands at a distracted distance from the two rabbis. From the instant of her entrance, Florian and Miriam are intent only on each other, oblivious to the presence of the two older men. Miriam lays down the bowl then, smiling invitingly, offers the chalice to Florian. But before giving it to him, she sips from the brim of the chalice herself. Then she hands it to him and he drinks, his eyes fixed on her. The chalice is at the center of this scene and the invitation is wonderfully explicit.

The male feather and the female chalice – there’s no way this is unintentional. This is savvy knowing filmmaking, winking at the audience in a way that is much closer to Ernst Lubitsch than Caligari, and it wittily sets the stage for the triangle plot that will eventually ignite the movie’s climax. 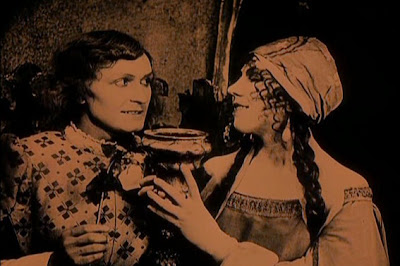 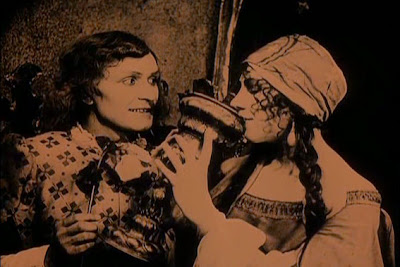