The Golem and Me

The Golem and Me

For me, this 21-essay series on The Golem (1920) is the perverse opposite of the current October Horror Movie Challenge 2011 that’s sweeping the movie-loving internet.  While all the other horror fans are watching 31 horror movies, I’ve chosen to watch one single great movie multiple times (not promising 31 times, though—that’s a little extreme even for me).

The springboard for my Golem series is the essay that I wrote back in 2007 for Horror 101:  The A-List of Horror Films and Monster Movies, edited by Aaron Christensen.  Here’s the opening of my entry on The Golem:


“I first saw The Golem (1920), projected from a ping pong table onto a roll-up screen in my family’s basement, when I was a pre-teenager in the early 1970’s. After seeing pictures of the Golem makeup in Famous Monsters of Filmland, I simply had to see the whole movie. I saved up money from a weekend job, and purchased the entire multi-reel 8mm. movie from Blackhawk Films.

“These were not ideal conditions to watch a movie! There was no sound accompaniment, except the monotonous sputter of the projector, and no comfortable chairs. If the film jammed, you had around five seconds to rescue it before a melt pattern would spread across the screen.  But the movie worked its magic in our dark unfinished basement, and I’ve loved it ever since.”

Regarding those first Golem memories, it wasn’t just Famous Monsters that initially stoked my interest. There were also tantalizing pictures and write-ups on The Golem in two of my favorite books, still preserved in my collection with torn covers and dog-eared pages, Dennis Gifford’s A Pictorial History of Horror Movies and Carlos Clarens’ An Illustrated History of the Horror Film. Thanks to these books and magazines, I knew all about The Golem before I ever received that large packet of 8mm. film reels from Blackhawk Films.

The funny thing is that I responded so well to the movie, even seen under such poor viewing conditions. But many of my early and favorite film memories were under similarly miserable conditions.  Sometimes I wonder how I ever responded to a movie like Alfred Hitchcock’s North by Northwest.  The first time that I saw North by Northwest, it was shown on television at 4:30 to 6 one afternoon (concluding with the cropdusting scene) and then 4:30 to 6 the next afternoon—all on a small TV screen with fuzzy reception and padded with 44 minutes worth of commercials.  It’s funny to think that movies under those conditions could be just as magical as watching today’s high definition prints with impeccable sound on a wide screen TV.  Back in the 60’s and early 70’s, we budding movie fans couldn’t afford to be picky.

At some point, my parents held a series of garage sales, selling the childhood possessions that my sister and I had deserted years before. I assume they must have sold those reels of The Golem. I’ve read that places like the Antique Roadshow auctions regularly get inquiries about lost silent movies found in attics or basements. In most cases, it’s just a forgotten reel of Blackhawk film. Sometimes I like to think that my old Golem reels have fooled people into thinking they’re lost treasure. I can imagine some poor sap peering at the frames, with their weird architecture and strange Frankenstein-like monster, and wondering: What on earth is this thing? And:  Is it worth anything? The unfortunate answer is: Not really. But my better answer, cribbed from The Maltese Falcon might be, “It’s the stuff that dreams are made of…” 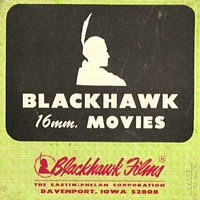