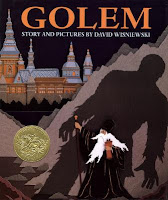 “Golem is the Hebrew word for ‘shapeless mass.’ In the Bible (Psalms 139:16), a form of the word describes mankind before creation: ‘Thine eyes did see my substance (galmi), yet being unperfect.’ In the Talmud, the revered collection of Jewish civil and sacred law, the word denotes anything imperfect or incomplete. Unconscious Adam, initially a body without a soul (neshamah), is referred to as a Golem. From this usage comes the Golem of medieval legend.”

Like the Golem, Adam in the Book of Genesis is born of clay. Before God breathes a soul into the clay, the shape is Golem (“shapeless mass”).

In The Golem (1920), our first view of the Golem is of a large shapeless mass of clay, stored in a corner of Rabbi’s Loew’s secret chamber. His face grim, the rabbi presses his fingers deep into the wet clay and begins forming the face. He works hard at the task, his fingers digging into the clay.


He’s not presented as a monster. The scene is not intended to be scary. But it is a wonderfully mystical scene that links the Golem first to nature and astrology and then to a central symbol of religion, as a prelude to the viewer’s full closeup confrontation with the rabbi’s art.

In Wegener’s portrayal, the Golem starts as soul-less and eventually moves toward the demonic. He never receives a proper soul.

In many tellings of Golem legends, this is not the case. Often, the Golem seems on the verge of having a soul or in fleeting possession of a precarious soul. David Wisniewski’s Caldecott-winning children’s book Golem (1996) doesn’t follow the Wegener monster story, but instead uses the legend to explore the meaning of what it is to have a soul.

In Wisniewski’s book, Rabbi Loew creates the Golem and his first words are: “Father… was this wise to do?” The rabbi responds by treating him as a soul-less servant, whose only purpose in life is to protect the Jewish community. The Golem does his job but he discovers more to life. “The sun is rising,” he says. “The sky changes from black to blue. It is very beautiful.” Then, after the Golem has completed all his tasks and the rabbi is ready to change him back to inanimate clay, the Golem looks at the setting sun, and says, “Father, will I remember this?” It is very clear that this Golem now has a soul, even as the rabbi sends him back to “a dreamless sleep of clay.”

Great legends are like that, offering a prism of enchanting interpretations. I love the 1920 movie version very much, but there’s much life in this legend yet and themes to be explored that the movie barely touches.

Postscript:  After writing my 2007 draft of this essay, my friend Dan Kocher gave me the book The Amazing Adventures of Kavalier and Clay by Michael Chabon. Dan thought I’d enjoy the book’s fascinating insertion of the Golem legend into the world of 1940s comic books with their superheroes and Nazi villains. Dan was right.  I loved the book, and it definitely serves as another illustration of my claim that there’s life in the old legend yet.

Email ThisBlogThis!Share to TwitterShare to FacebookShare to Pinterest
Labels: 1920, Golem by David Wisniewski, The Amazing Adventures of Kavalier and Clay, The Golem