The Golem: Heroes and Villains

But when it comes to defining heroes and villains, the above paragraph is about as far as I’m willing to go. The individual characters themselves are surprisingly fluid and ethically ambiguous. A character who appears heroic in one scene may take on a different character in the next.

As the appointed representative of the imperial court, Florian initially appears to be a potentially villainous character. His ongoing flirtation with Miriam can be read as lecherous and self-serving. But in the end, he becomes a victim himself, earning at least a modicum of sympathy.

Miriam has been seen as a dark seductress by some, and she certainly is flirtatious and sexual. But the movie also presents her as a fairytale princess, and so it is impossible not to side with her when Rabbi Loew forces her to her knees and tells her that he will appoint a guardian over her to force her to behave properly. As an audience, we feel that the princess must escape from the bower where she is trapped. She deserves to be rescued by a knight. By the end of the movie, she must fill the familiar role of the heroine carried off by the monster.

Famulus starts as a sympathetic character, but ultimately it is his rash actions that will be a catalyst for disaster. At the close, his character will appear ambiguous at best.

The Golem moves from being an amoral servant (a potential source of good works if appropriately guided) to a dangerous, uncontrolled monster.

And, above all, there is Rabbi Loew. I’ve already commented on how the Jewish community is passive in their response to oppression in the opening scenes. Audiences may sympathize with a passive response, but in their search for a hero, they want action. By creating a Golem to protect the oppressed community of the ghetto, Rabbi Loew offers an alternative to passivity. His response is pro-active and, therefore, potentially heroic.

But just as quickly as the movie sets up Rabbi Loew as being wise and pro-active, it swiftly undermines his heroism in two ways. First, as mentioned above, he threatens his daughter, placing himself in the role of the oppressor (and raising concerns that his use of magic may be as much for his own personal use as for the community good). Second, in learning how to create a Golem, he consults a book on Necromancie. In an earlier post, I argued that the movie views magic as amoral, rather than immoral. But necromancy is pushing the envelope. I think at this point, it is natural for the audience to decide that Rabbi Loew may be venturing into areas that are very, very dangerous. He is playing with fire. 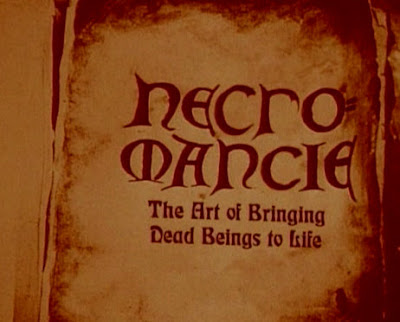