In Henry Ossawa Tanner’s painting The Annunciation, Mary’s toes peek out from under her robe.  She’s a teenage girl getting ready for bed—not beautiful perhaps, but when the light shines on her she’s radiant.  She’s a girl who has no idea how pretty she is.

Most representations of Mary in art depict her as older and classically beautiful.  She usually appears gentle, obedient, patient, and humble.  Maybe a little dull, too.  She rarely looks like the teenage girls I’ve met.

But, in all fairness, the classical representation of Mary is perfectly in line with the information that the evangelist Luke supplies in his gospel telling of the Annunciation.  When sending the angel Gabriel to her doorstep, God implies that Mary is just about perfection on earth.  This is the porcelain Mary of the Old Masters.

Painting in 1898, working from the same text as the religious artists who preceded him, Henry Ossawa Tanner teased out an endlessly interesting Mary who succeeds in being a teenage girl while also suggesting why God might look on her with approval.  It’s a difficult balance, miraculously achieved by Tanner.  I like to think he was working from that little section in the middle of the scene where Mary talks back to Gabriel.  “How shall this be,” she asks the angel, “since I have no husband?”  A good actress could say that line many ways.  It could be said with harsh disbelief (“Get real, angel…”), or deep sarcasm (“yeah, right…”), or confusion (“I think you may have the wrong Mary…”), or concern (“do you know something I don’t know”), or curiosity (“tell me more…”).

Tanner’s Mary is a charmer.  Overcoming any initial fear, she leans forward toward the angel.  She gives a little half-smile, as if coaxing Gabriel to tell more.  “I’m listening,” she seems to say.  “You have my attention.  Now convince me.”

She looks smart.  And she looks like she could be wickedly funny.  There’s a wit to the way she cocks her head, waiting for a response.  “How shall this be since I have no husband?”  She’s sharp enough to say it with quiet irony.  Then she patiently waits for the reply.  She’s a listener.

Her hands are clasped, perhaps implying that the angel has interrupted her mid-prayer.  But now the prayer is forgotten as Gabriel fully commands her attention and interest.  She is mulling the words of the angel, his prophetic announcement that she will be the mother of one who will “reign over the house of Jacob forever.”  That’s a big—and potentially awkward—claim for an unwed teenage girl from a small village like .

But the light that fills the room is real.  Her inclination is to accept the miraculous.  And so she asks the question, “How shall this be…” already inwardly knowing that she is strong enough and brave enough to face this future.

That’s just my interpretation.  The son of an African Methodist Episcopal bishop, Henry Ossawa Tanner was doubtless better schooled in the Bible than me.  He taught Sunday School in his young adult years, regularly attended church throughout his life, and painted Biblical scenes with commitment and enthusiasm for more than three decades.  A couple of years ago, I attended the Henry Ossawa Tanner special exhibition at the Pennsylvania Academy of the Fine Arts where you could view the range of his religious painting.  A gentle spirituality permeated the show, with The Annunciation setting the tone.

You’d think the innovative use of blinding light to represent the angel Gabriel would dominate the picture.  But Mary more than holds her own.  I keep coming back to Tanner’s representation of Mary because it’s her humanity that ultimately makes the painting so captivating.  It’s a humanity that is at the core of the Annunciation story and is so often missed. 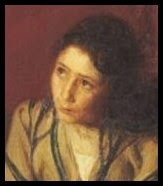