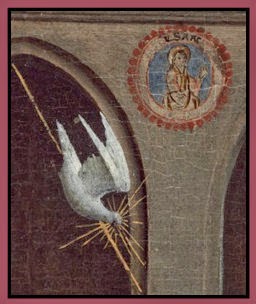 Annunciation Blogging
for Advent 2014:
The Annunciation
by Jan van Eyck

Fade in.  An angel appears before Mary.  The angel makes a surprising proposal, Mary responds with a question, the angel reassures her, and she graciously agrees to the plan.  The vignette has a beginning, middle, and end.  Classically constructed, the scene begins with the angel announcing, “Hail, O favored one, the Lord is with You!” and ends with Mary entering into an agreement, “(L)et it be to me according to your word.”  Fade out.

As told by the evangelist Luke in his gospel, the Annunciation has the shape of a conventional narrative.  It unfolds like a well-constructed movie scene.

Most art of the Annunciation—both literary and visual—treats the scene as conventional narrative, in the manner of Luke.  The artist thoughtfully selects a moment in the story that captures what they want to express about the text.  It could be the second when the angel enters, or the angel greeting Mary, or Mary’s asking “How shall this be?” or Mary’s final note of gracious acceptance.  That’s the normal way of doing things.

Jan van Eyck’s masterpiece The Annunciation employs a very different strategy, sometimes used by the Old Masters but rarely to this extent.  The whole story flashes before us at a stroke, with van Eyck treating time with the creativity that Cezanne would later bring to the treatment of space.  In van Eyck’s The Annunciation, there is no natural beginning or end, no unfolding of narrative, no reading from left to right.  The story is shaped into an image that instantaneously contains the whole.

Within a single frame, the angel enters, the angel speaks, Mary responds with a dramatic gesture symbolizing alarm, the angel reassures, and Mary speaks the final words.  It’s all there.

But this brief Annunciation story is wrapped within a much larger story. Biblical history, prophecy, and theology surround the main characters through the illustrations on the tiled floor and the paintings and stained glass that decorate the walls.  The remarkable details on the two most prominent tile scenes depict David slaying Goliath and Samson pulling down the temple, events that were believed to prefigure the works of Jesus.  This mighty encompassing framework is an important part of van Eyck’s vision.  Vast history is telescoped into a narrow scene with the Annunciation particulars in the foreground and the Biblical backstory lining the background.

Van Eyck’s grand painting is awash in symbolism, with the drama enacted in a sacred space—the church interior.  The angel utters the visible words “Ave gratia plena” (translation: “Hail, full of Grace…”) and the words of Mary’s response, “ecce ancilla domini” (translation: “Behold, the handmaiden of the Lord…”) appear upside down.  They have been flipped because they are addressed to neither Gabriel nor the viewer but rather upward to God, whose Holy Spirit is descending as a dove on streaming rays of gold leaf.

The apostle Paul famously said in his first letter to the Corinthians that we see through a glass, darkly.  Rooted in secular time and space, most of the world’s artwork explores the limited viewpoint which is part of the human condition.  But in this one painting, van Eyck ventures to depict a world stripped of its mundane and profane elements, where every detail resonates with the sacred.

It’s a God’s eye view, filled with awe and joy.