Wagon Master blogging
for
The John Ford Blogathon,
essay 5 of 6

A Western for My Grandmother


Grandma Anderson loved westerns.  For me, it was one of those things that you just take for granted about a close family member… and then one day they’re gone and you wonder why you never talked about the subject.  Now I’ve belatedly come to love westerns too, and my questions languish unanswered.  It’s 25 years too late.  Questions like —

At best, I can hazard a guess at what some of my grandmother’s answers might have been.

What was the first western you saw?

My grandmother, Maud Elizabeth Clem, was born in , , located in the beautiful Mountains (she’d want me to note that!), in 1902.  This means she was a baby when movies were in their infancy and she grew up right alongside them.  We know there was a movie theater in nearby Culpeper because my grandmother’s father worked as a projectionist there.  And Theodore Carl Anderson, a northerner working in the south, accepted a part-time job playing trumpet in the orchestra, accompanying the silent movies.  So I don’t think it’s much of a stretch to assume that this couple who would be my grandparents, Theodore and Maud, enjoyed some movies together in the Culpeper Theater in the early 1920s, prior to their marriage in 1923.

In those days, she might have enjoyed the westerns of William S. Hart, Bronco “Billy” Anderson (doubtless getting a kick out of the fact that her beau had the same last name!), Buck Jones, Hoot Gibson, and Tom Mix.  But what I really want to know is what she thought of Harry Carey, early western star and father of Wagon Master co-star Harry Carey, Jr.  Did she see some of 27 westerns that Carey made with a young John Ford, still in his twenties(!), directing?  Most are lost now.  What might she have remembered?

Who was your favorite star?

When you’ve watched westerns for more than fifty years, you can probably work through a lot of favorite stars.  In the thirties, she would have followed the singing cowboys, the cowboy serials, and the long “b” western apprenticeship of John Wayne.  When television came along in the early 1950s, she and her husband were among the first in town to buy a TV.  The popular television cowboys were just fine with her, too.  She liked them all.

How did westerns change over the years?

Movies were for fun.  I doubt she noticed the changes as they slowly unfolded.  She started going to movies in Virginia in the silent era, was living on Long Island when talkies became the new sensation, and was settled in Riverhead, New York, when they bought that first television.  Life around her was changing fast, but to her, the westerns probably weren’t changing much at all.  There were good guys, bad guys, and Indians;  there were horses and wagon trains;  and there were gunfights and chases.  It was quintessentially American entertainment.

What did you most want to see when you finally had a chance to travel out west?

When they were in their 50s, my grandmother and grandfather embarked on their dream vacation, traveling west in a camper.  They took a northern route, exploring the Rocky Mountains, Yellowstone, and .  They listened to lots of Johnny Cash on the radio and became big fans.  A couple of years later, our family joined them for a similar trip, taking a southern route this time and visiting sites like the Alamo, a pathetic trickle of a Rio Grande, Tombstone, the Petrified Forest, and the Grand Canyon.  I think my grandmother was the one really excited about the Alamo and , and she would have been the one most disappointed in the , too.  It looked so much bigger in the movies.

Did you see Wagon Master?  Did you like it?

If a western was playing at the Riverhead Theater in 1950, chances are that Grandma saw it.  She liked going to the movies, and she wouldn’t miss a western if she could help it.  I bet she liked Wagon Master, too.  After all, it had good guys, bad guys, and Indians;  horses and wagon trains;  and gunfights and chases.  That’s more than enough to make a good western.  Just settle back and enjoy.

The Uncredited Stars of Wagon Master

I love the way Wagon Master respects its animal stars.  One of my favorite moments belongs to Ward Bond.  Riding ahead of the wagon train with Travis Blue (Ben Johnson), Elder Wiggs (Ward Bond) is thrown by his horse and comes up swearing.  Travis points out that the horse was avoiding quicksand and may have saved his life.  Elder Wiggs thinks a minute, turns to the horse, and says a heartfelt, “Sorry, horse.”

Naturally, when a western has two heroes (Ben Johnson and Harry Carey, Jr.), there are going to be two horses right there with them.  In scene after scene, their horses provide solid support.

Ben Johnson rides Steel, a sorrel stallion owned by Johnson’s father-in-law Clarence “Fat” Jones.  The Fat Jones Stables supplied many of the horses used in countless westerns.  Steel was one of his star horses, very calm and able to consistently deliver for demanding film crews on tight schedules.  Steel was a handsome chestnut horse with a distinctive white blaze down his face.  Some of the biggest names in town—John Wayne, Gregory Peck, Randolph Scott, Joel McCrea, Henry Fonda, and Clark Gable—rode Steel and he made them look good.  But everyone knew he was Johnson’s horse.  Johnson rode Steel in She Wore a Yellow Ribbon, Wagon Master, and Rio Grande and even took him out for a turn on the rodeo circuit.

Like most stars, Steel had his own stunt double.  For a major chase scene, like the one where Johnson is pursued by a band of Navajo in Wagon Master, Bingo was brought in for the honors.  And Bingo can MOVE!

Harry Carey, Jr. rode his own horse, Mormon, who received his name because he was born and raised in .  In his memoir Company of Heroes, Carey writes about Ford’s shock at hearing the horse’s name.  Apparently, Ford was planning on asking Carey to co-star in his new western about Mormon pioneers and approached Carey while he was grooming his horse.  Ford casually asked the horse’s name and was shocked to hear Carey answer, “Mormon.”  That settled it for Ford.  “How would you like to ride him in a western?” he asked.  And Carey responded, “Boy, that would be great!”

It’s not all horses in Wagon Master.  Dogs add to the excitement, too.  In order to insert a little more action to a shot, John Ford loved to show a dog dashing across the screen.  Wagon Master is full of dogs.  In fact, the dog theme is introduced in the credits, when a beautifully composed image of a turning wagon wheel is photobombed by one of the dogs.  That’s just the beginning of their canine scene-stealing throughout the movie.  Dogs meant family for Ford;  if the wagon train was carrying dogs, it meant there were good families on the move.

Accompanied by Harry Carey, Jr., the actor George O’Brien asked John Ford if he could bring a “genius of western music” by his office.  Ford agreed, and so they brought in songwriter Stan Jones with his guitar.  Jones sang his current hit, the now-standard “Ghost Riders in the Sky,” and then introduced an as-yet unrecorded song.  As described in Company of Heroes, Jones said, “Mr. Ford, I wrote a sort of sequel to ‘Ghost Riders’ called ‘Rollin’ Dust.’  I’d like to sing that, too, if it’s okay.  I really like it better myself.”

We ride along the same trails
As long long ago
And sparks of hoofbeats glitter
In the shadows as they go
Out across the backlands
Where the dust has laid so long
You see them ropin’ through the night
And hear their riding song:

Ford bought it on the spot.  “I need that song abut the ghost town—the one you just sang—for my picture.”  And then Ford asked for three more in the same vein, which Jones quickly delivered on.

“Rollin’ Dust” is sung at a low point in the journey, accompanying an atmospheric slow montage of blowing dust and bone-tired people. 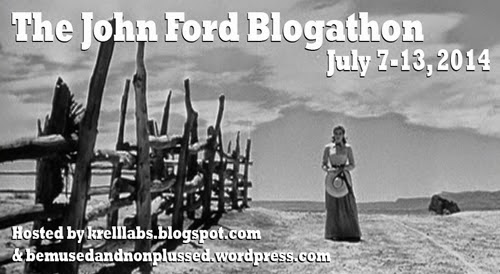