So here’s my second 2006 series possibility:  21 essays on “Stuck Between Stations,” a song from the album Boys and Girls in America by The Hold Steady.

When the entire band kicks in after the break, with Craig Finn singing “We drink/We dry up/Then we crumble into dust,” The Hold Steady breaks all records for intensity.  Bands don’t get tighter than this.  That’s why I love this song.

But where do you get 21 essays from a simple rock song?  Well, it’s not just the pounding commitment of the band, but the off-the-chart intelligence of the lyrics, too.  Weaving together Jack Kerouac allusions with the suicide of poet John Berryman, the lyrics spark with images that deserve attention.  And more than most songs, this one is anchored to a place:  The Washington Avenue Bridge in where John Berryman leaped to his death.

On the Road by Kerouac, John Berryman talking to the devil, teenage angst, and the Golden Gophers…  that’s more than enough to explore.  And I love the way the band looks so ordinary, like people you might pass any day on the street, never suspecting that on a good night they’re possibly the hardest-rocking band in America. 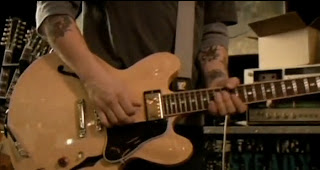 Over the next three days, I’ll be proposing some more 2006 ideas (with no promises that I’ll necessarily be getting to any of them…).  But I’m wide open to other suggestions.  Any ideas for 2006 movies, books, short stories, poems, songs, paintings, or other cultural artifacts that might inspire a good 21 Essays series?

Email ThisBlogThis!Share to TwitterShare to FacebookShare to Pinterest
Labels: 2006, Stuck Between Stations, The Hold Steady