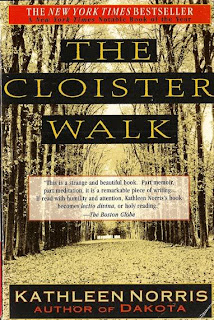 In these long breaks between the signature 21 Essays series, I’m experimenting with a new feature focused on possibilities for future series.  I’ll spin the roulette wheel to pick a year (or set of years) and then brainstorm on some potential essay topics.  This time the wheel spins, gradually slows, then clicks to a stop, pointing at:  2006.

So here’s my first 2006 series possibility:  21 essays on The Cloister Walk, a thoughtful and deeply personal meditation on monastic life by poet Kathleen Norris.

As a Benedictine oblate, Norris provides a borderline insider’s perspective of the monastery life.  But even as she fully immerses herself in the rhythms of the Benedictine life, her thoughts keeping turning outward as she reflects on her marriage, her Protestant commitments, her work as a successful essayist and poet, and her ongoing struggles with faith.  Most importantly, she expresses how normal all this is.  Oblates are associated with a monastic community but they maintain full lives outside the monastery, free to pursue career and the challenges of married life.  While a Christian commitment is required, Catholicism is optional.  And as for struggling with faith, that’s just a normal part of the path even for the saintliest of the monks and nuns.

Throughout, Norris foremost remains a poet.  “Anyone with a sacramental understanding of our world knows that it’s the small things that count,” she writes.  Like religion, like poetry—the small observations open onto the largest vistas.  Writing of her growing friendships with Benedictines, her cloistered friends start to sound like a community of unusually gentle poets.

Norris isn’t about to supplant Thomas Merton in my affections—Merton’s position as my primary spiritual go-to mentor is pretty unassailable—but she walks a similar path.  I think I could find much to blog about in The Cloister Walk, maybe using Norris’ probing thoughts to examine my own career, married life, and spiritual struggles.

Over the next four days, I’ll be proposing some more 2006 ideas (with no promises that I’ll necessarily be getting to any of them…).  But I’m wide open to other suggestions.  Any ideas for 2006 movies, books, short stories, poems, songs, paintings, or other cultural artifacts that might inspire a good 21 Essays series?