Since my son Terry introduced me to these books, I’ve asked him to write today’s entry. 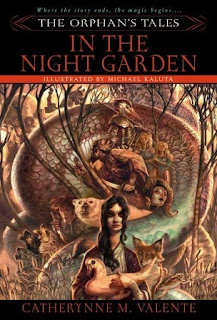 Here’s my 2006 series possibility:  21 essays on Catherynne M. Valente’s two-book series The Orphan’s Tales, an ingenious collection of interrelated stories with more mythological and folkloric references than just about any fantasy book I’ve ever read. And that is saying something.

In order to truly explore every avenue of these two books, In the Night Garden and In the Cities of Coin and Spice, I’d probably need dozens of essays. Valente includes everything from monopods to griffins, and basilisks to manticores, and even (SPOILER alert!) a journey to the land of the dead.

If I were to write a short series of essays based on these books, I’d probably take my hint from Valente’s interlocking narrative:  Each post would expand upon parts of previous posts, connecting the discussions in surprising ways, and finding larger meanings and themes that resonate with each other.  When read in order, the posts would ultimately illuminate one continuous subject (threaded through them all) but with greater depth and variety than any single post could carry.  That was Valente’s method for telling the stories and it would seem a fitting tribute to her.

This is the last of our official 2006 ideas (with no promises that we’ll necessarily be getting to any of them…) but there’ll be one more bonus entry of great 2006 movies that we’ve saved for last.  I’ll post it this weekend.