So here’s my third 2006 series possibility:  21 essays on My Love, an animated short by Aleksandr Petrov.

Petrov has developed an instantly recognizable style that he achieves by painting his images upon glass, primarily using his fingers to smear the paint.  Prior to My Love, this approach yielded masterpieces like The Cow and The Old Man and the Sea.  Although I love all three, I think I could benefit from a crash course in his work to completely appreciate them.  That’s why I’d welcome an opportunity to do 21 essays on My Love.  It could be my crash course.

The one thing that’s certain about My Love is that the images are non-stop gorgeous (just check out the image captures below).  They flow naturally from reality to dream to nightmare with momentary glimpses of perfect clarity among the swirl of life.  The visual effect is dazzling but I suspect there’s more to this movie than meets the eye—plot points that get lost in translation.  Until I know more, some of the incidents in My Love can feel more random than organic.

If I were to dive into these depths, I would first read the original source material.  The movie is based on Ivan Shmelyov’s 1927 novel A Love Story.  And it appears that Shmelyov’s book itself is a spin on Ivan Turgenev’s First Love.  I’d happily read them both.  Combine that with a study of Petrov’s extraordinary artistic technique, and I’d be ready to write some essays. 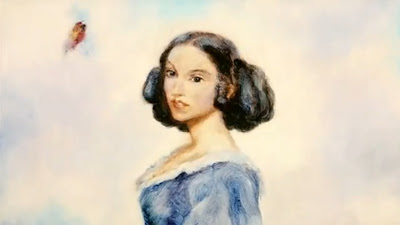 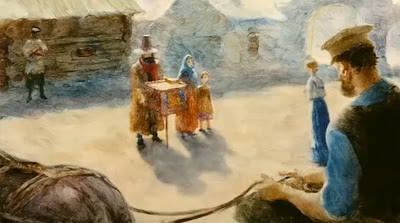 Over the next two days, I’ll be proposing some more 2006 ideas (with no promises that I’ll necessarily be getting to any of them…).  But I’m wide open to other suggestions.  Any ideas for 2006 movies, books, short stories, poems, songs, paintings, or other cultural artifacts that might inspire a good 21 Essays series?

Email ThisBlogThis!Share to TwitterShare to FacebookShare to Pinterest
Labels: 2006, Aleksandr Petrov, My Love