The Fourth Greatest Cartoon... Ever!

Daffy-blogging, essay 1 of 15 blog entries on
Duck Dodgers in the 24 ½th Century

Part One, Daffy as He Sees Himself

The celebrity status of Chuck Jones hit record height back in 1994 when a survey of 1,000 animation professionals gave four out of the top five slots to Chuck Jones’ cartoons: 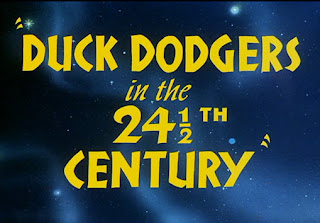 In retrospect, this top five appears a little Jones-heavy even for a Jones fanatic like myself.  But Jones was riding a crest of popularity at the time buoyed by virtue of living a long and active life, by publishing a best-selling memoir called Chuck Amuck in 1989, and by lucking out by having his cartoons consistently accessible to the general public.  I sure can’t blame these 1,000 animation professionals for loving these shorts.  Taken individually, they’re great choices.

Our focus is #4, Duck Dodgers in the 24 ½th Century, a very funny cartoon with some fantastic science fiction imagery and a classic fadeout.  It stars Daffy Duck and Porky Pig, who had already racked up 34 years of combined stardom between them by 1953, and a relative newcomer to the Warner Bros. universe, Marvin the Martian who was first introduced to earthlings in 1948.

Duck Dodgers usually gets credited to Chuck Jones, but it might be more accurately described as a product of the Chuck Jones unit at Warner Bros. Cartoons, Inc.  As director, Jones was the boss responsible for a great deal of the short’s artistry but ultimately this was a group effort that required creativity from all.  Here’s the short list of Jones’ crack Duck Dodgers team: 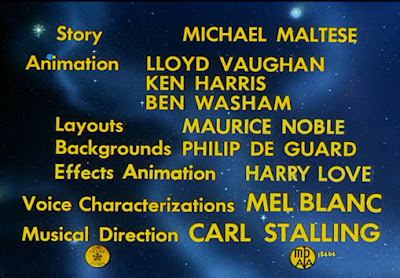 Warner Bros. was organized to churn out cartoons, counting on assembly-line efficiency at a minimum of expense.  Jones and his team were more ambitious than that.  When they latched onto a concept that inspired them, they had the talent to dazzle.  Duck Dodgers was one of those concepts.