Daffy-blogging, essay 3 of 15 blog entries on

Part One, Rockets to the Moon

With his 1948 Bugs Bunny cartoon Haredevil Hare, Chuck Jones leaped ahead of the curve.  The first science fiction feature film based on the new rocket technology was still three years in the future (Destination Moon).  With Bugs Bunny’s trip to the moon in Haredevil Hare, Jones was already busy teasing the genre before its official birth!


Haredevil Hare is comedy based on contemporary (1948) newspaper headlines.  By contrast, the science fiction world of Duck Dodgers in the 24 ½th Century (1953) has its roots elsewhere.  The origins of Duck Dodgers can be found in the space opera adventures of Buck Rogers, as well as the many fantastical intergalactic worlds that Buck Rogers inspired.

In the 1930s, Buck Rogers was a multimedia phenomenon, perhaps only second to Mickey Mouse in mass marketing appeal.  Here’s a fast chronology:

1928:  Amazing Stories published Armageddon 2419 A.D. by Philip Frances Nowlan.  Its hero, Anthony Rogers, was a man who becomes exposed to a mysterious gas, slept for nearly 500 years, and awakened in the 25th century.

1932: A Buck Rogers radio program premiered.  It ran through the golden age of radio, with new episodes broadcast through 1947.

1933: Nowlan and comic strip artist Dick Calkins adapted the original stories into a novella, Buck Rogers in the 25th Century.

1934:  Buck Rogers was a star at the Chicago World’s Fair through a ten-minute movie, Buck Rogers in the 25th Century: An Interplanetary Battle with the Tiger Men of Mars, commissioned just for the World’s Fair. 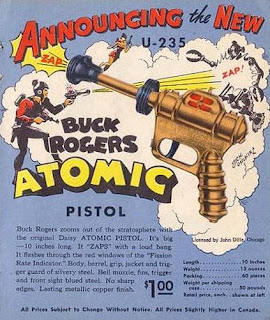 1950-51:  ABC Television produced a live broadcast of Buck Rogers adventures in prime time (unfortunately losing the ratings battle when the network placed it opposite the up-and-coming star
Milton Berle on Texaco Star Theatre).

The Buck Rogers approach to space opera spawned other comic strip series.  Brick Bradford and Flash Gordon were the most successful, with Flash’s multi-media success comparable to Buck Rogers.  The space opera, as defined by Buck Rogers, was inescapable in the 1930s.

These were formative years for the budding artists who would eventually make up the Chuck Jones unit.  Born in 1912, Chuck Jones would have been 16 when that first Buck Rogers story was published in Amazing Stories.  Layout artist Maurice Noble (who did the incredible futuristic backgrounds) would have been 18.  Both voice artist Mel Blanc and writer Michael Maltese would have been 20.  By the time they formed a team at Warner Bros., these artists had Buck Rogers firmly imprinted in their minds, with the Buck Rogers name synonymous with science fiction.  It was as inescapable as Star Wars would be for generations just a couple of decades down the line.