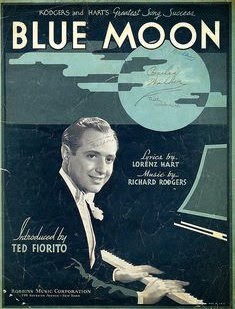 
Let’s consider the song “Blue Moon” as a work in progress:

Eighty years ago, composer Richard Rodgers nailed the melody of “Blue Moon” first time out.  He tossed it off, genius-style.

Lorenz Hart, a genius in a different vein, struggled with lyrics to fit the tune.  His first three efforts were clever but not magical.  The whole package didn’t click.  On his fourth try, Hart uncharacteristically delivered a nearly straight love song.  He couldn’t resist some shades of irony from entering—it was his natural default—but the new words described a formulaic situation (boy meets girl, love-at-first-sight) in an openly sentimental way.

This was the version of “Blue Moon” that became a beloved standard.  The song opens from the perspective of a lonely guy, with the initial emphasis falling on the “blue,” or sad, nature of the moon.  But blue moon riffs on the idea of a rare moment as well, and the classic once-in-a-lifetime moment occurs on the song’s bridge:

And then there suddenly appeared before me,
The only one my arms will ever hold
I heard somebody whisper, “Please adore me.”
And when I looked,
The moon had turned to gold.

The last verse revels in the new-found prospect of eternal love:

Blue moon,
Now I’m no longer alone
Without a dream in my heart
Without a love of my own.

That’s about as happy-ever-after as things get in a song.

While this version of “Blue Moon” became hugely popular, I like to think that there has always been a disconnect between music and lyrics.  Rodgers’ original melody hinted at depths that Hart’s lyrics evaded.

Memphis, Tennessee:  In the aftermath of their regionally popular recording of “That’s All Right,” a 19-year-old kid named Elvis Presley, producer Sam Phillips of Sun Records, and guitarist Scotty Moore were poking and prodding “Blue Moon,” trying to find an Elvis song in the old standby.  Elvis, Scotty, and bassist Bill Black played “Blue Moon” late into the night and quit unsatisfied.  The recordings went into storage.

A month later in August 1954, they tried again.  But Phillips remained unenthusiastic about the approach and declined to release the song.  When the major label RCA signed Elvis 18 months later, they took the Sun recordings, too.  Culled from the August 1954 session, “Blue Moon” was released in 1956 on Elvis’ first RCA album, the classic Elvis Presley.

Elvis’ version never gets past the first half of the Rodgers and Hart song.  He sings the first two verses and then repeats them.  This means he never gets to the bridge or the third verse, where the lovers meet.  Without the love-at-first-sight climax, all that’s left is the yearning for love.  Happiness is replaced by melancholia.

And melancholia is Presley’s gift to the Rodgers and Hart song, with Elvis punctuating the melody with a falsetto wail that I think is heartbreaking but my daughter finds creepy.  In either case, it represents a radical reinterpretation that locates a sadness in the Rodgers tune that never found voice in Hart’s lyrics.

In 1987, a Canadian indie rock band called the Cowboy Junkies refashioned the stripped-down Elvis version of “Blue Moon,” adding a framing story to explain the sorrow.  They called it “Blue Moon Revisited (Song for Elvis)” and it can be found on their 1988 album The Trinity Sessions.

The Elvis “Blue Moon” was an odd hybrid of country and blues, taking things in a different direction than the rockabilly of the early Elvis hits.  This was an idiom that the Cowboy Junkies felt comfortable exploring.  From the outset, their music was low-key, thoughtful, and unabashedly pessimistic.  For their second album, they rented the Church of the Holy Trinity in for a day, gathered around a single microphone and played their music.

The implied loss in the Elvis version finally becomes explicit in “Blue Moon Revisited.”  Elvis’ eerie falsetto wailing becomes linked to the death of a lover:

You see I was afraid
To let my baby stray
I kept him too tightly by my side
And then one sad day he went away and he died.

Rodgers and Hart by Samuel Marx and Jan Clayton
Last Train to Memphis: The Rise of Elvis Presley by Peter Guralnick