Once Upon a Time on the Set of Blackmail 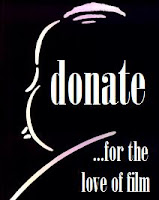 then please follow this link to make a donation to the National Film Preservation Foundation to support the effort to make the recently discovered silent film The White Shadow (1924) accessible to a wide audience via the internet.

Blackmail-blogging, essay 1 of 6 blog entries
Once Upon a Time on the Set of Blackmail 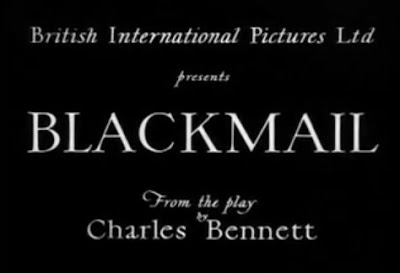 The thought of young Alfred Hitchcock as a bright and eager assistant on the set of The White Shadow (1924) reminded me of another precocious kid who haunted film sets.  Just four years after The White Shadow, Alfred Hitchcock played the role of the respected director and Michael Powell (later to direct Black Narcissus, The Red Shoes, Peeping Tom, and other classics) was the kid with his eye on the director’s chair.  Here’s how Powell described the scene in a 1987 interview with Raymond Durgnat:

“… Hitchcock heaved himself out of his chair, which was a very difficult operation because he’d just fitted into it, and he said, ‘Mr. Powell?’  ‘Yes, Mr. Hitchcock?’  ‘Mr. Cox and I usually have a few beers after the shooting. Would you join us?’  And we were friends ever afterward. [laughter]”

At this very early point in his film career, Michael Powell was employed as the still photographer on the set and the movie was . Afterwards, Powell continued to work with Hitchcock on The Manxman (1929) and then Blackmail (1929).

I like to imagine that Powell continued to join Hitchcock for beer after a full day of shooting.  Dissolve to...

Part One, The First Fantasy Dialogue

Hitchcock:  “I’m looking for Micky Powell. Has anyone seen him? Comic chap with a silly grin—it disguises his ambition.  Ah, there he is...  Mr. Powell, so good to see you after a hard day of filming.”

Powell:  “A hard day for whom?  You don’t even look through the camera.  Anyone can see you have the easiest job in the studio.”

Hitchcock:  “Blackmail is already finished for me.  I am hard at work on my next film.”

Powell:  “You appear quite attentive when Miss Ondra is on the set.”

Hitchcock:  “It is a director’s job to be in love with his leading lady.  That is private wisdom for any would-be director.  Please do not share this wisdom with *.”

Powell:  “Someday I hope to find a collaborator as talented as .”

Hitchcock:  “Good collaborators are essential but never let them take the credit.  It was Alfred Hitchcock’s The Lodger and it will be Alfred Hitchcock’s Blackmail, and script doctors like Micky Powell and Alma must be content with that.  The screenwriter must never share the credit, Mr. Powell.” 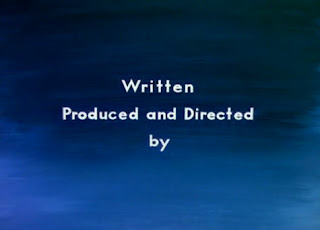 Powell:  “Yet I could imagine a credit of Written, Produced, and Directed by Alfred Hitchcock and Michael Powell?  I think it would look handsome on the screen.”

Hitchcock:  “Heresy. It shall always be Alfred Hitchcock alone above the title, with an apostrophe to flaunt my ownership.”

Powell:  “In my opinion, writers should shoot arrows at director’s credits.”

Hitchcock:  “Ha!  What writer could ever hit the bull’s eye?  I don’t think a director has anything to fear from your archers, Mr. Powell.  May I interest you in another pint?” 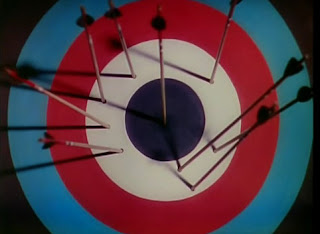 
Over the next six days, I’ll be using 21 Essays to explore possible linkages between Alfred Hitchcock and Michael Powell, offsetting my speculations against the background of a close look at the sound version of Blackmail (1929).  Frankly, little is actually known of the private relationship of these two ostensibly public figures.  Hitchcock rarely spoke about Powell, and, for his part, Powell only began elaborating about their relationship after Hitchcock’s death.  And while there’s no reason to doubt Powell’s stories, it would be nice to find some independent confirmations of them!

Here’s what we know:  Twenty-three-year-old Michael Powell met Alfred Hitchcock (age 29) in 1928 when Powell was hired to work as stills photographer on Hitchcock’s .  Powell continued to work with Hitchcock in this uncredited position on The Manxman (1929) and Blackmail (1929).  Powell claims that he was invited to work on the script of Blackmail, and that he himself suggested the use of the for the climactic chase.  His full claim was that he conceived and wrote a new third act for the movie at the request of Hitchcock himself.

All of this is very plausible.  Hitchcock and Powell remained friendly throughout their lives, although their paths rarely crossed.  Powell was certainly creative enough to contribute original ideas to a script and the movie completely rewrites the third act of Charles Burnett’s play Blackmail.  Hitchcock often noted that there were difficulties settling on an end for the film.

The fact that Hitchcock never mentioned Powell in association with Blackmail means little.  Hitchcock was a master self-promoter—an expert at the art of personal branding.  He rarely discussed watching movies by other filmmakers and was a master at steering interviews away from the subject of influences.  He flaunted an air of modesty even as he claimed all credit for himself.  That was simply Hitchcock’s way.

In 1929, it’s very easy to imagine that Powell already displayed creative and leadership traits destined to blossom during his remarkable directing career.  It’s easy to imagine that Hitchcock would have noted his latent talents.  And it’s extremely easy to imagine—especially considering various tantalizing similarities between their works—that each of these artists kept an eye on the other’s work as they matured, keenly watching each other’s films and silently cribbing ideas.

More facts about their relationship…  Blackmail was the last movie where they worked together.  In 1935, Powell went to Hitchcock for advice concerning his stalled career in so-called  “quota quickies.”  In 1945, Powell traveled to , looking for an American actress to play the lead in A Matter of Life and Death.  He stayed with the Hitchcocks and Alfred Hitchcock suggested he use Kim Hunter, recent star of Val Lewton’s The Seventh Victim (which ushers in a whole new slew of conjectures on the influence of Lewton upon Hitchcock—but that’s another series for another blogathon…).  In 1952, Powell visited again and once more was chauffered about the studios by the Hitchcocks.

Last of all, there’s the seemingly obvious linkage that’s really not much of a linkage at all.  Both Hitchcock and Powell simultaneously made groundbreaking film masterpieces about psychotic serial killers in 1959-60.  Hitchcock made Psycho and Powell made Peeping Tom.  While acknowledging that the relationship between the movies is primarily coincidental, it’s still pleasingly symmetrical to think of both men working together on Blackmail early in their careers and then plumbing so many of the same themes thirty years later when both Hitchcock and Powell were at the heights of their powers.