In these long breaks between the signature 21 Essays series, I’m experimenting with a new feature focused on possibilities for future series.  I’ll spin the roulette wheel to pick a year (or set of years) and then brainstorm on some potential essay topics.  This time the wheel spins, gradually slows, then clicks to a stop, pointing at:  1963.

So here’s my second 1963 series possibility:  21 essays on Maurice Sendak’s Where the Wild Things Are. 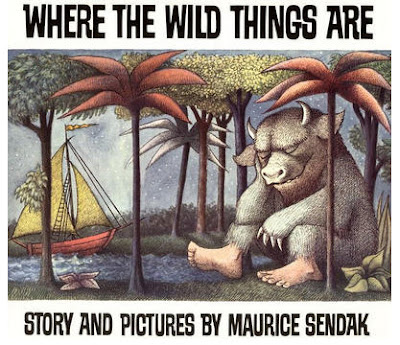 Fully realized in both words and images, Maurice Sendak’s Max is as real as any human in fiction.  He’s mean then sensitive, wild then controlling, one minute a king and the next a little boy.  When you’re a really great author, you can cut to a character’s essence in a single sentence:  “And Max, the king of all wild things, was lonely and wanted to be where someone loved him best of all.”

Over the next three days, I’ll be proposing some more 1963 ideas (with no promises that I’ll necessarily be getting to any of them…)  But I’m wide open to other suggestions.  Any ideas for 1963 movies, books, short stories, poems, songs, or other cultural artifacts that might inspire a good 21 Essays series?  Please share!

Email ThisBlogThis!Share to TwitterShare to FacebookShare to Pinterest
Labels: 1963, Where the Wild Things Are