Three years ago, my son Terry and I wrote a young adult fantasy novel called The Poem Beasts.  It is currently submitted for consideration at a major publisher.  In honor of the opening of the movie of The Hunger Games, a major work in the young adult genre, we offer a taste of our work—nine days of the poems of The Poem Beasts. 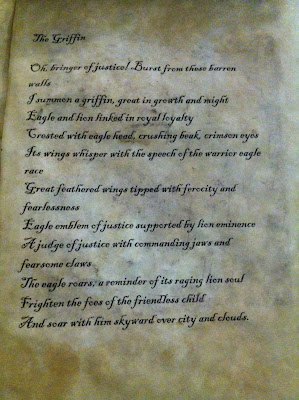 Transcription:
Oh, bringer of justice!  Burst from these barren walls
I summon a griffin, great in growth and might
Eagle and lion linked in royal loyalty
Crested with eagle head, crushing beak, crimson eyes
Its wings whisper with the speech of the warrior eagle race
Great feathered wings tipped with ferocity and fearlessness
Eagle emblem of justice supported by lion eminence
A judge of justice with commanding jaws and fearsome claws
The eagle roars, a reminder of its raging lion soul
Frighten the foes of the friendless child
And soar with him skyward over city and clouds

Anglo-Saxon Poetry:
As we conclude this bestiary series, I’d like to share a brief note about the writing of these nine poems.  Terry wrote most of the poetry following my guidelines.  I asked him to use alliterative verses loosely based on the Anglo-Saxon model of Beowulf.  In most cases, each line is composed of two half-lines and contains three stressed alliterations.  For example, in the above poem, a line like “The eagle roars, a reminder of its raging lion soul” has its half-line split at the comma and employs the “r” sound for its alliteration. An equivalent line from Beowulf would be:

In this Beowulf line (as translated by Seamus Heaney), the half-line break occurs after “came” and the “g” sound is used for the three stressed alliterations.

Terry and I adapted this form for our poetry because the young protagonist of The Poem Beasts, our young adult fantasy novel, comes from the Anglo-Saxon culture.

Historical Background:
Large predatory fusions of eagles and lions with a taste for horse-meat and a liking for gold, griffins have mythic roots that extend deep into ancient times. Much of this creature’s fame, however, stems from medieval European folklore.  According to these later tales, griffins mate for life and possess healing properties in different parts of their bodies.  Griffins became popular in heraldry as symbols of courage, boldness, intelligence, and military might. In British heraldry, only the females have wings—the rarer depictions of male griffins are shown with spikes instead.

Email ThisBlogThis!Share to TwitterShare to FacebookShare to Pinterest
Labels: Griffin, The Poem Beasts