At the Earth's Core

Proud to participate in “The Maddin-est Blogathon in the World!” (September 19 - 23), a tribute to Guy Maddin courtesy of the folks at Fandor. 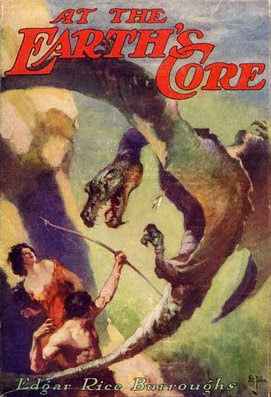 The modern scientific model of a thin earth crust, a massive layer of mantle, and a white-hot metallic core makes logical sense but does nothing for me aesthetically.  I’ll take a good hollow earth fiction any day.  Or the wonderful poetic image of a heart beating at the earth’s center.

My favorite hollow earth models populate their inner worlds with prehistoric monsters.  This offers tremendous imaginative benefits over the lifeless scientific paradigm.  For instance with the hollow earth model, earthquakes can be explained by herded mammoths toppling off cliffs, setting off seismic reverberations that can shake our side of the crust.

Jules Verne and Edgar Allen Poe couldn’t resist the pull of the hollow earth theory.  But my personal favorites are the Pellucidar books by Edgar Rice Burroughs, starting with At the Earth’s Core, where David Innes and other heroes of the inner world struggle for survival in a primeval world ruled by intelligent and malicious pterodactyls called Mahars.   Gravity is reversed along the interior surface of this earth ball.  There’s an internal sun floating at the center.  It’s a vicarious paradise for adventure-craving boys.

Guy Maddin doesn’t exactly give us a hollow earth in The Heart of the World, but it’s certainly closer to hollow earth than it is to 21st century geology.  The geo-cosmography of The Heart of the World allows for an immense man-made tube/slide that extends from the crust all the way to the center of the earth.  There’s no apparent temperature increase as you descend (our heroine Anna never breaks a sweat).  With a good telescope, you can peer down the tube and watch the earth’s heart beating.  Initially, we can’t tell the size of the heart but the old worn-out one is ably replaced by a normal human-sized heart at the end.  As the movie winds down, our heroine’s heart appears to be strong enough to keep the whole earth project going.  In a way, I guess, Anna becomes Gaia.

But—as even Terrence Malick learned from forty years of procrastination and occasional filmmaking—everything can be improved with dinosaurs.  Maddin had an opportunity here that he unfortunately missed.  By adding just a handful more one-second shots, he could have had Anna flash by some spectacular views of the hollow earth, maybe with a styracosaurus and T. Rex briefly interrupting their battle to view her descent, as she swooshed by
on her slide to the core.  A fast visual homage to
Willis O’Brien and The Lost World would have fit right in with the rest of the film references.  Yes, I know that The Heart of the World is still a great short without the dinos, but just think about what a great theme park ride it could have made with them!  (I’m thinking: Universal Studio’s of , with rides through the avalanches, tours of the , slides to the center of the earth, and inescapable sad music piped in from hidden speakers.)

Email ThisBlogThis!Share to TwitterShare to FacebookShare to Pinterest
Labels: 2000, Guy Maddin, The Heart of the World, The Lost World