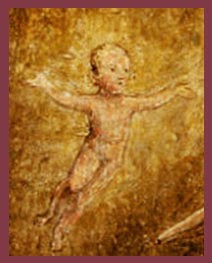 Nativity Blogging
for the Season of Christmastide 2014-15:
William Blake’s
The Nativity

The most memorable Christmas Eve sermon I’ve ever heard was delivered by Pastor Brian Rhea (now pastor at Newcombtown United Methodist Church in Millville, New Jersey) shortly after the birth of his second child.  Fresh from experience, Brian vividly shared just how gross childbirth really is, with all its blood, tears, and other leaking fluids.  And he didn’t imagine the manger was all tidy and neat either!  It was truly a great sermon.

Today’s featured painting by William Blake (1757-1827) is the polar opposite.  Blake’s The Nativity has to be the most antiseptic of all childbirth paintings.  The baby literally flies out of the womb, spotless and glowing, into the hands of the waiting midwife, in this case Mary’s cousin Elizabeth.


While it would be impossible to realistically reconcile Brian’s sermon with Blake’s painting, I’d like to think that both descriptions fall within a broad Christian tradition that’s always been open to embracing paradoxes.  Blake’s painting is the real boundary-tester.  As expressed in his poetry and artwork, Blake’s mysterious, complex, and intensely personal beliefs evince strong Gnostic tendencies, and Gnosticism has been labeled heretical by the mainstream church for nearly two thousand years.  But given a choice between celebrating visionary genius or the cold judgments of Inquisition-style church tribunals, I’ll go with genius any day.  Blake’s okay by me.

William Blake dedicated his life to expressing his radical and mystical ideas through poetry, painting and etching, and the art of printing.  He’s probably best known for his poetry book Songs of Innocence and of Experience which contains the famous poem “The Tyger”:

Tyger, Tyger, burning bright
In the forest of the night:
What immortal hand or eye,
Could frame thy fearful symmetry?

The Nativity is one of fifty small Bible-based paintings that Blake made for Thomas Butts, an English War Office clerk, in 1899 and 1890.  For this project, Blake enjoyed considerable artistic freedom in choosing his subjects and approach.  While many of the paintings have been lost, there is enough of a record to attempt a reasonable guess at the scope of the ambitious project.  In Blake as an Artist, art historian David Bindman suggests that “the series probably consisted of approximately fifteen Old Testament subjects and thirty-five from the Life of Christ.”

The Nativity would have been the second of the Life of Christ paintings, following The Angel Gabriel appearing to Zacharias, which is in the collection of the Metropolitan Museum of Art, and preceding The Adoration of the Magi in the and .  In The Nativity, Joseph supports the unconscious Mary as she gives birth.  The child, his arms outstretched in a cruciform position, flies toward the outstretched hands of .  An infant John the Baptist sits in the lap of .  Behind , oxen contentedly feed from a trough.  The star of —cruciform, like the baby—shines through the window.

Throughout the ages, most Gnostic sects have professed a belief that the material world we live in is flawed beyond redemption and that secret knowledge is needed to unite the soul with the perfection of God’s spiritual realm.  This type of belief can become very dualistic, with earthly and human life viewed as untouchable.  A belief of this sort tends to rule out an understanding of Jesus as wholly Man as well as wholly God (a basic paradox of mainstream Christianity).  In most Gnostic sects, the earthy childbirth described in Pastor Rhea’s sermon would be altogether too yucky to apply to the spiritual being of Jesus.  Therefore, Blake paints a pristine, miraculous, and apparently pain-free birth.

Blake painted The Nativity in tempera, laying the paint over a mixture of whiting and carpenter’s glue adhered to a copper surface.  While he adopted this technique in the hope of preserving the original colors, his method failed, resulting in two centuries of darkening and surface cracking.  It’s not what Blake wanted, but I love the effect.  It brings out an other-worldly, archaic beauty in Blake’s vision that can’t be easily dismissed.  It’s hauntingly weird.

Blake as an Artist by David Bindman
William Blake:  The Seer and His Visions by Milton Klonsky
Genius by Harold Bloom
Philadelphia Museum of Art Collections