Encountering the Creature from the Black Lagoon 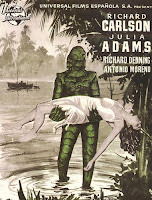 Turn back the clock 42 years, walk into my bedroom and look at the shelves over my bed.  There you’ll see my collection of monster kits.  There’s King Kong, Godzilla, the Frankenstein Monster, Dracula, the Mummy, the Wolf Man, and, of course, the Creature from the Black Lagoon.

models were assembled from molded plastic pieces that you glued together using rubber cement.  I heard that you could get brain damage from the smell of the cement so I always attempted to assemble them without breathing.  I took small gulps from time to time, trying not to inhale through the nose—in retrospect it was probably close to the gulping way the Gill Man appeared to breathe on land.  Even though I was clumsy with most assembly projects, the models must have been pretty simple because I don’t remember any serious errors.  My monster models looked really cool.

You were supposed to paint them but my few experiments with color were pathetic.  The Aurora Gill Man was a very respectable dark green and he stayed that way on my shelf.  Color photographs of the Gill Man makeup from the 1950s always look inappropriately gaudy with their bright red lips.  In my mind, a colorized Creature looks like an unpainted model. 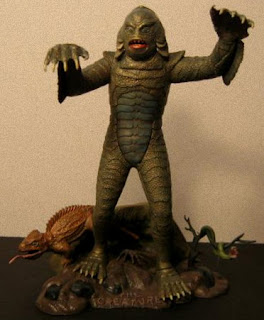 My family often took vacations to and—for as long as I can remember—I associated the Creature with the tourist attractions at Marineland, Silver Springs, Homosassa Springs, and Weeki Wachee Springs.  These were the Gill Man’s natural habitats, where he could swim freely or run amok.  I was right, of course.  The Gill Man was never really from the Amazon.  He was a native Floridian.

Weeki Wachee still operates as a weird and wacky tourist attraction today.  Over half a century ago, some creative visionaries built a below-water-level theater where audiences could enjoy a show of mermaids gracefully swimming their way through basic fairy tales.  Every now and then, the mermaids would discreetly steal a long breath of air from hoses hidden in the scenery and then swim back into the action.  They were exemplary swimmers and superb breath-holders. The underwater shots of Kay swimming in Creature from the Black Lagoon are of Weeki Wachee mermaid Ginger Stanley (later Hallowell), often doing trademark Weeki Wachee somersaults.

At Weeki Wachee, the male divers (usually playing princes or comedy relief) often swim like the Gill Man.  That trick where the Gill Man swims upside down subtly mirroring the movements of Julia Addams—you see that all the time at Weeki Wachee.  I think it’s the legacy of Ricou Browning, who worked at Weeki Wachee in its early days prior to his association with Creature from the Black Lagoon.  Director Jack Arnold cast Browning as the underwater Gill Man when he saw how well his Weeki Wachee moves worked on film.

Much as I love the Marineland scene in Revenge of the Creature, I always wish they’d figured out a way to work Weeki Wachee into the series.  The Gill Man should have received at least one opportunity to swim with the mermaids.

Several years ago, I took my son to a monster convention in .  My friend Mark Clark, author of Smirk, Sneer and Scream and the recently published Star Trek FAQ, met me there and introduced me to some of his colleagues.  That’s where I met Tom Weaver.  I shook his hand.  Then I awkwardly stood there star struck, unable to find anything intelligent to say.  No one knows more about the Creature from the Black Lagoon than Tom Weaver.  He’s interviewed everyone involved, read all the surviving production material, and, most importantly, retained his initial monster kid enthusiasm.

I couldn’t have written these pieces without Tom Weaver’s research.  Where I’ve made errors, they’re because I neglected to proof them against Weaver’s commentaries and writings.

I met Ricou Browning at that convention, too.  I thanked him for his Gill Man, his work on Sea Hunt and Flipper, and his contributions to the James Bond movie Thunderball.

On his 1979 album Repeat When Necessary, Dave Edmunds featured a song called “Creature from the Black Lagoon,” written by guitarist Billy Bremner.  I listened to it a lot in college.  It’s a great novelty song, perfect for Edmunds’ style (and benefiting from solid backup by his legendary Rockpile companions—Nick Lowe, Billy Bremner, and Terry Williams).  Here it is: