In these long breaks between the signature 21 Essays series, I’m experimenting with a new feature focused on possibilities for future series.  I’ll spin the roulette wheel to pick a year (or set of years) and then brainstorm on some potential essay topics.  This time the wheel spins, gradually slows, then clicks to a stop, pointing at:  1856-1860.

So here’s an 1859 series possibility:  21 essays on “Goblin Market,” a poem by Christina Rossetti.

Backwards up the mossy glen
Turn’d and troop’d the goblin men,
With their shrill repeated cry,
“Come buy, come buy.”

Christina Rossetti’s intense narrative poem “Goblin Market” is a recent discovery for me.  I read it in preparation for my series on Christina Rossetti’s “In the Bleak Midwinter.”  Much as I loved “Goblin Market,” it didn’t provide much grist for the “Midwinter” series which leaned more toward pleasant Nativity thoughts than images of evil goblin merchants and their seductive and juicy fruits.

If “In the Bleak Midwinter” was appropriate for Christmas, “Goblin Market” might be a good choice for Halloween.  In a cultural scene overcrowded with zombies and vampires, it might be nice to acknowledge the too-often-overlooked goblins.

One had a cat’s face,
One whisk’d a tail,
One tramp’d at a rat’s pace,
One crawl’d like a snail,
One like a wombat prowl’d obtuse and furry,
One like a ratel tumbled hurry skurry. 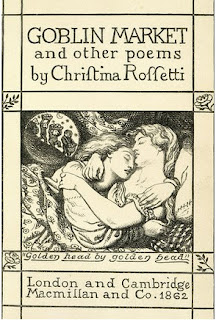 Over the next two days, I’ll be proposing some more 1856-60 ideas (with no promises that I’ll necessarily be getting to any of them…).  But I’m wide open to other suggestions.  Any ideas for 1856-60 books, short stories, poems, paintings, songs, or other cultural artifacts that might inspire a good 21 Essays series?